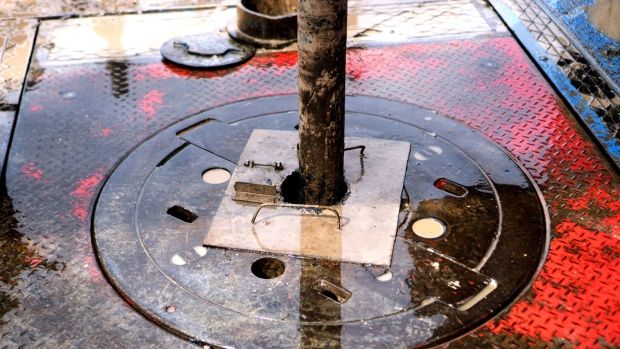 A drill pipe operates on the rotary table as Chinese workers from XinJiang Beiken Energy Engineering Stock Co. Ltd. drill for gas for the Ukrgazvydobuvannya Subsidiary Co. of Naftogaz of Ukraine National JSC in Poltava region, Ukraine, on Wednesday, April 4, 2018. Ukraine transports about one third of Russia’s natural gas supplies to the European Union through a pipeline network connected with Slovakia, Romania, Hungary, Poland and Moldova. Photographer: Vincent Mundy/Bloomberg , Bloomberg

(Bloomberg) -- TotalEnergies SE, Eni SpA and Occidental Petroleum Corp. struck an agreement with Algeria to develop the Berkine basin, reflecting growing interest in the nation’s energy resources as importers pull away from Russia.

An accord signed Tuesday will see the companies drill scores of oil wells, but they’ll also look into tapping the natural gas that’s pumped out with the crude. That means the deal could help boost gas shipments to Europe, which has been rushing to reduce reliance on top supplier Russia since its invasion of Ukraine.

“The opportunity to develop and valorize associated gas resources will be studied by the partners, thus increasing export potential towards Europe,” Total said in a statement. The agreement didn’t quantify potential gas volumes.

Italian Prime Minister Mario Draghi, who has courted Algeria and several other African nations in search of energy deals, attended an event in Algiers on Monday at which President Abdelmadjid Tebboune flagged the expected signing.

Draghi said that Algerian state energy company Sonatrach had promised to start supplying an extra 4 billion cubic meters of gas to Italy -- agreed in a separate deal signed with Eni in April. The timeframe for delivery is unclear.

Italy, which is linked to Algeria by pipeline, is doing better than many European peers in reducing its dependence on Moscow. The nation has cut its reliance on Russian gas to 25% from about 40% at the start of 2022. By contrast, Germany -- Europe’s largest economy -- still imports about 35% of its needs from Russia.

While Algerian flows to Italy are set to increase, the latter actually imported 15% less pipeline gas from the African nation between January and May than it did a year earlier, according to Italian gas network company Snam SpA.