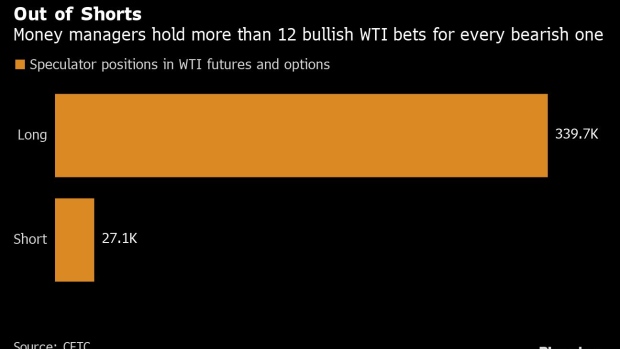 (Bloomberg) -- The oil market is running out of sellers in its surge to almost $90 a barrel.

Whether it’s speculators, traders hedging their barrels in storage tanks or U.S. producers, some of the biggest drivers of bearish price movements have all retreated in recent months.

As global stockpiles fall to seven-year lows, traders don’t need to sell as many futures contracts to hedge those supplies. Producers in the U.S. shale patch have shown little sign of looking to lock in future sales, according to several derivatives brokers over the past week. Meanwhile as calls for $100 crude mount, speculators have turned increasingly bullish on prices, shying away from short positions.

“The market has run out of sellers,” according to Ilia Bouchouev, a partner at Pentathlon Investments and adjunct professor at New York University. “The largest player in the futures market is the inventory hedger. When inventories are drawing they cannot hedge.”

The lack of selling pressure helps to explain why oil prices have carried on rallying in the face of a wobble in equity markets and some other risk assets. While crude has gained more than 10% this year, the S&P 500 is down almost 8%.

There’s no sign that speculators are betting on a slump in crude futures in the near term. Money managers were short just 27,000 futures and options contracts of West Texas Intermediate last week, versus long positions totaling almost 340,000 contracts.

Last time positioning was this stretched, was shortly before prices cratered by $10 in a single day in late-November. It’s a reminder that when shorts leave the market, things can quickly become too one-sided.

But changes in speculative flows are more fleeting than hedging volumes.

Late last year, executives, including Pioneer Natural Resources Co.’s Scott Sheffield, said they expect oil to range between $75 and $100. Some, including Pioneer, have been closing out almost all their hedges for this year. Others, like Occidental Corp., have said they wouldn’t add new hedging positions.

That producer reticence is partly Goldman Sachs Group Inc. has been calling for triple-digit crude in the months ahead.

As prices rise, the market will see “producers hedging less or even buying back hedges and more consumers buying,” Goldman analysts including Damien Courvalin wrote in a note. “It is this shift in corporate flows that will contribute to the rally in long-dated prices.”