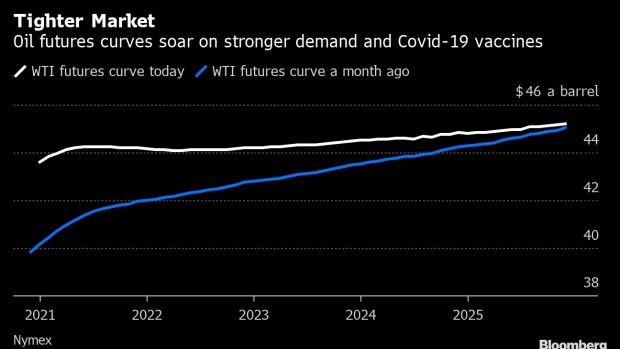 A pump jack operates near Stratford, Texas, U.S., on Saturday, Sept. 26, 2020. After all the trauma the U.S. oil industry has been through this year -- from production cuts to mass layoffs and a string of bankruptcies -- many producers say they’re still prioritizing output over reducing debt. Photographer: Angus Mordant/Bloomberg , Bloomberg

(Bloomberg) -- The oil futures curve, an important gauge of trader bullishness, has strengthened to levels last seen in the early days of the pandemic as demand from Asian buyers surges and optimism grows for successful Covid-19 vaccines.

Two of the oil-market’s most-watched inter-month price spreads -- one denoting short-term strength, the other reflecting an improving longer-term outlook -- this week flipped into what traders call backwardation, a structure that’s generally seen as reflecting tighter conditions.

The move isn’t only significant because it suggests that traders are re-evaluating the supply and demand outlook. If sustained, it might also attract investors seeking to capture what’s known as roll-yield -- selling the most immediate contract and buying a later one at a cheaper price.

“The rally in flat prices has been accompanied by a rally in timespreads, which is normally a sign of stronger oil market fundamentals,” said Helge Andre Martinsen, senior oil market analyst at DNB Bank ASA. “The demand resilience in China and India has certainly surpassed expectations.”

Brent futures for January are now trading above those for February, removing an incentive to store. With Asian demand recovering strongly from the pandemic -- in China, even the beleaguered air travel market is nearing normal levels -- refiners there have been snapping up crude barrels from all over the world. That’s helping whittle away a record glut built up earlier in the year.

Further along the curve, West Texas Intermediate for December 2021 has also flipped to a premium over the same contracts for a year later. It was back in a small contango at about midday London time. That spread -- often called Dec.-Red-Dec. and a favored trade among the oil-focused hedge funds -- has rallied to its strongest since February as expectations have grown that a vaccine will eventually pull oil demand higher again.

The curve’s move into backwardation suggests traders will start to struggle to keep oil in storage. That, in turn, may mean that lots of barrels are going to be released into the market. At the same time, the curve is also signaling that the market currently needs those supplies.

The flattening curve is also down to a surge in hedging by producers. When headline prices rally, oil companies will lock in their future sales prices by selling the forward curve. That’s been happening now with U.S. shale drillers, but also producers as far afield as the North Sea and West Africa.

There are pockets of weakness still. Key swaps that value physical crude over the next few weeks continue to point to an oversupply in the North Sea, despite the pick-up in Asian purchases. All the while, European refineries continue to be shut down, idled or curbed because of weaker demand amid the latest coronavirus outbreak.

That may be putting a dent in an otherwise more bullish demand picture from Asia, but it comes at a time when OPEC and allied oil producers are still withholding millions of barrels of crude from the global market. Those nations will meet early next week to decide their next steps.

An “oil demand rebound in 2021 is now a certainty and markets are not waiting to price it in,” said Bjarne Schieldrop, chief commodities analyst at SEB AB. Such moves in the curve often occur “well before the actual physical tightening begins.”