A new system of oil governance is shaping up: Former IEA analyst

Just a day after U.S. crude futures for May delivery plunged below zero for the first time ever, June futures plummeted 43 per cent to close below US$12 a barrel in New York. A massive supply glut brought on by the pandemic and a worldwide shortage of storage space have touched off a relentless rout that has shifted the entire forward curve for oil.

The meltdown spreading across global oil markets has already wiped out tens of thousands of jobs and frozen billions of dollars in capital spending. Its deflationary effect threatens to further cripple economies around the world already reeling from coronavirus-fueled lockdowns. Storage tanks, pipelines and tankers have become overwhelmed by a vast oversupply brought on by an unprecedented plunge in global fuel demand.

Oil is a “dangerous market to trade in right now,” said Pierre Andurand, founder of Andurand Capital Management LLP, in a Bloomberg TV interview. The market needs oil production to fall immediately for prices to recover, he said.

The price crash spilled into the ETF market, with the biggest crude-tracking fund, the United States Oil Fund LP, moving some of its WTI contracts into later months, according to a regulatory filing. The spread between June and July U.S. West Texas Intermediate crude futures rallied more than US$1 a barrel on the move.

Oil ministers from the OPEC+ coalition held an unscheduled conference call on Tuesday to discuss the collapse without settling on new policy measures. The Texas Railroad Commission, meanwhile, opted to put off a decision on whether to impose oil-production quotas.

In London, the immediate contract for Brent crude was at the biggest discount to the following month in data since 2008. U.S. marker WTI’s June contract was halted three times early in New York to manage the volatility.

“If you start to look at the actual supply-demand situation for oil, it’s not so obvious that by the time those contracts expire, the storage situation around Cushing will be very different than what it is in May,” said Martijn Rats, Global Oil Strategist at Morgan Stanley, in a Bloomberg Radio interview. “The prices of these futures will need to connect to the physical reality, and they are likely to crack lower.”

We will never let the great U.S. Oil & Gas Industry down. I have instructed the Secretary of Energy and Secretary of the Treasury to formulate a plan which will make funds available so that these very important companies and jobs will be secured long into the future!

Brent crude futures for June slumped 24 per cent to close at US$19.33 a barrel.

The collapse is reverberating across the oil industry, with prices trading below zero across America on Monday. WTI Midland in Texas -- a flagship marker for the U.S. shale industry -- was at -US$13.13 a barrel, while crude in Alaska was at -US$46.63.

There are signs that these stunningly low prices are here to stay as tanks across the globe fill up. Royal Vopak NV, the world’s biggest independent storage company, said almost all of its space is sold.

Crude stockpiles at Cushing -- America’s key storage hub and delivery point of the WTI contract -- have jumped 48 per cent to almost 55 million barrels since the end of February. U.S. nationwide inventories are estimated to have increased another 14 million barrels last week, according to a Bloomberg survey.

The Dated Brent benchmark, a global reference for nearly two thirds of the world’s physical flows, plunged to US$13.24 a barrel on Tuesday, its lowest since 1999, according to price reporting agency S&P Global Platts. That means that key European and African crude streams, including Urals from Russia and Bonny Light from Nigeria, would sell now under US$10 a barrel, as they trade at a discount to the Dated Brent benchmark. 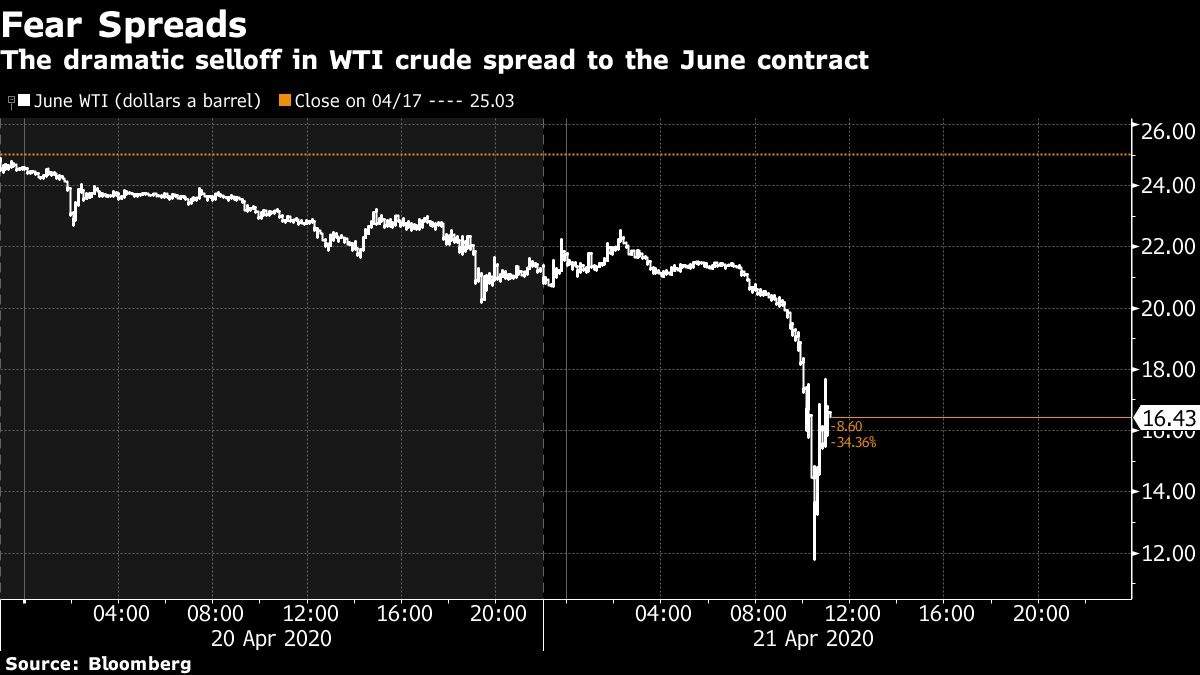