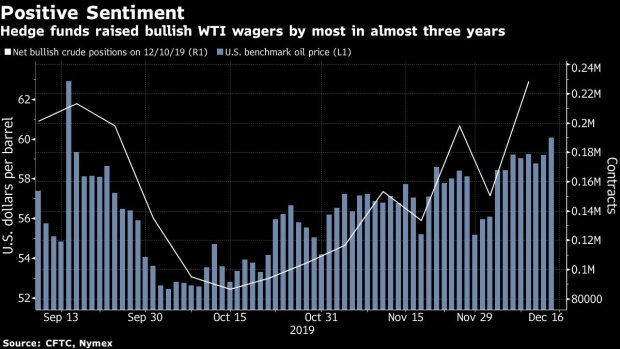 (Bloomberg) -- Oil was steady near a three-month high as optimism the U.S.-China trade deal will spur demand for crude was tempered by caution due to the agreement’s limited nature and lack of detail.

Futures edged lower in New York after closing up 1.5% at the highest since Sept. 16 on Friday. The deal involves China buying more American farm products and making new commitments on intellectual property, while the U.S. will suspend new levies and halve existing tariffs on $120 billion of Chinese imports. It’s expected to be signed and released publicly in early January.

While the partial trade deal leaves most of the tariffs built up over the 20-month conflict in place, it’s adding to a more positive outlook for oil prices as it followed deeper-than-expected output cuts by OPEC+ and signs American production growth may be slowing. Hedge funds increased net-bullish wagers on West Texas Intermediate crude by the most in three years in the week through Dec. 10.

The lack of details on the trade deal could put oil under pressure this week, said Howie Lee, an economist at Oversea-Chinese Banking Corp. in Singapore. However, the upward trend in prices since early October will likely remain intact given the improved sentiment in the market, he said.

Brent for February settlement declined 0.1% to $65.15 a barrel on the London-based ICE Futures Europe Exchange after rising 1.6% Friday and 1.3% last week. The global benchmark was at a $5.23 premium to WTI for the same month.

President Donald Trump said he expects China’s buying of American agricultural goods to reach $50 billion a year “pretty soon.” While the U.S. halved 15% duties on $120 billion of Chinese imports, it will maintain 25% levies on another $250 billion of goods.

Meanwhile, the International Energy Agency last week cut its forecast for U.S. oil supply growth to 1.1 million barrels a day for 2020, compared with 1.6 million this year.

A partial trade deal gives oil another tailwind into year-end, although the agreement is unlikely to restore full business confidence, Stephen Innes, chief Asia market strategist at AxiTrader Ltd., said in a note. If other big forecasting agencies follow the IEA in downgrading U.S. output estimates that could be another fillip for prices, he said.

To contact the reporter on this story: Elizabeth Low in Singapore at elow39@bloomberg.net