Oil prices held close to the $20-a-barrel mark after U.S. government data showed the biggest build in stockpiles in more than three years.

“The market has largely priced in the combination of producers putting more oil in the market and demand destruction occurring from the coronavirus,” said Gene McGillian, vice president of market research at Tradition Energy. “But there is still a lot of worry for what happens in the next four to six weeks with U.S. inventory possibly filling to maximum capacity.”

The U.S. stockpile build will likely reinforce what many believe is inevitable in coming weeks and months: that physical tanks, ships and caverns around the world will fill to the brim with plentiful supply as the spread of the coronavirus shuts down economies while two of the world’s largest oil producing nations duke it out in a price war. 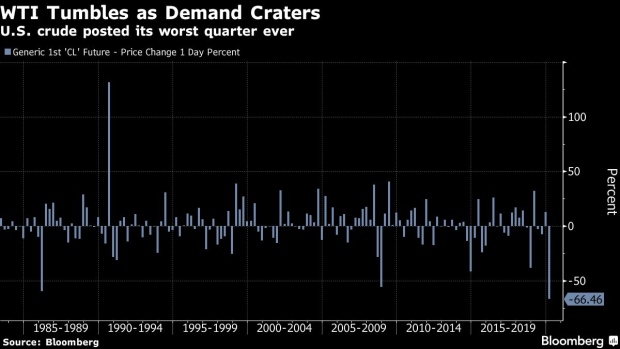 Oil futures in New York were little changed on Wednesday after trading in shallow negative territory earlier following a record decline in the first quarter. While state-run Aramco is showing no sign of bowing to pressure from U.S. President Donald Trump to dial back its price war, Russia doesn’t plan to increase output because it’s not profitable to do so, according to a government official familiar with the country’s plans.

The declarations follow a flurry of U.S.-driven diplomacy, with Trump speaking with both Russian and Saudi leaders, though the former OPEC+ allies have no plans to talk to each other, the Kremlin said.

In any event, an agreement to cut output would probably be too late and fall short of the loss in consumption globally, according to Goldman Sachs Group Inc. The market is grappling with a bumper oversupply, while trading house Vitol SA said demand is set to drop by as much as 30 million barrels a day in April.

“With demand destruction across the globe and now with Saudi flooding the markets with oil we feel it is only a matter of time before oil is trading in the teens and perhaps the low teens,” said Tariq Zahir, a fund manager at Tyche Capital Advisors LLC.

Saudi Arabia has started the month by pushing crude supply to record levels, according to an industry official familiar with the kingdom’s operations. Aramco has been loading 15 tankers with 18.8 million barrels of oil, the company said Wednesday in a tweet.

Yet Russia’s decision to hold off on an increase highlights the stress that producers are under around the world. On Wednesday, Whiting Petroleum Corp., facing more than a quarter-billion dollar debt it could not pay, filed for bankruptcy as the market collapse struck down another shale explorer.

Meanwhile, U.S. Treasury Secretary Steven Mnuchin said he was continuing to ask Congress for approval to buy oil to fill up the strategic petroleum reserves. Investors say that such a move would likely buy time, but would not solve the world’s storage issue.