West Texas Intermediate rose Friday, bringing this week’s gain to around 4 per cent. Futures nevertheless recorded their first back-to-back monthly decline since 2020 as fears of an economic slowdown fueled bearish sentiment across markets. The US economy shrank for a second quarter as rampant inflation undercut consumer spending. Citigroup Inc. says there are signs the oil market is moderating.

Still, Exxon Mobil Corp. doesn’t see any signs of major fuel demand destruction. “I wouldn’t tell you that we’re seeing something that would say we are in a recession, or near recession,” CEO Darren Woods said. 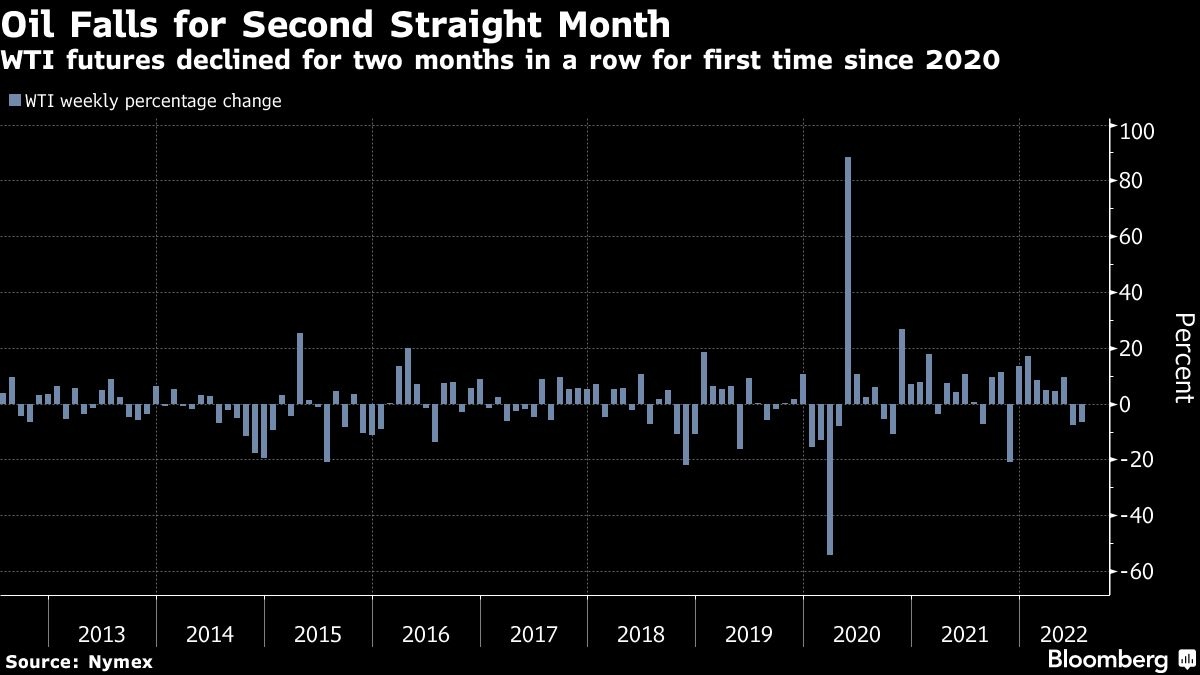 While oil has given up most of the gains seen following Russia’s invasion of Ukraine in late February, the US benchmark is still up more than 30 per cent this year. The surge in energy prices has underpinned oil producer earnings, with Exxon and Chevron Corp. joining Shell with record profits. A weaker dollar has also helped to boost commodity prices.

“The underlying fundamentals for oil still remain quite strong,” said Edward Bell, senior director of market economics at Emirates NBD Bank PJSC. “There are serious risks around supply: sanctions on Russia that will kick in more meaningfully later this year, OPEC+ topping out in terms of what it can add to the market and the supply response in the US not coming on.”

Oil production in Texas and New Mexico dipped in May, latest data from the US government showed, in the latest sign that growth is slowing the prolific Permian Basin. Growth has largely stalled even as producers add drilling rigs due to rising inflation in everything from labor to equipment costs.

The spread between WTI and Brent, also known as the arb, has widened as a reduction in Russian crude flows tightened markets in Europe. The global benchmark was at a premium of around US$11 to US crude, compared with about US$6 at the start of the month. The move is exacerbated by Brent crude’s September contract expiry, but the October spread is also wide at about US$7 a barrel.

The US is optimistic that there could be some positive announcements from the OPEC+ meeting next week, a senior Biden administration official said. The gathering will determine whether President Joe Biden will receive the additional crude he requested for the global market during his visit to Saudi Arabia in mid-July.

“With no major signs of fuel demand destruction, oil seems like it will soon find a home above the US$100 a barrel mark,” said Edward Moya, senior market analyst at Oanda. “WTI was unable to hold onto the US$100 level as profit-taking kicked in,” he added.