Oil crumpled under the weight of a broader market selloff as the European Union softened some of its proposed sanctions on Russian crude to appease potential holdouts.

West Texas Intermediate futures in New York dropped over US$6 a barrel, the most since the end of March. The EU looked set to weaken its sanctions package on Russia, while Saudi Arabia cut its prices in a sign of flagging demand in top importer China. Equity markets retreated on concern over how much the Federal Reserve will have to boost rates to tame inflation.

“The less-prohibitive sanctions plan on Russian oil may take less of its supply offline and highlights the complexity of sanctions against Russian energy,” said Rohan Reddy, director of research at Global X Management. “The pushback from some EU members like Hungary and Slovakia could mean the EU may need to go back to the drawing board on its initial sanctions proposal.” 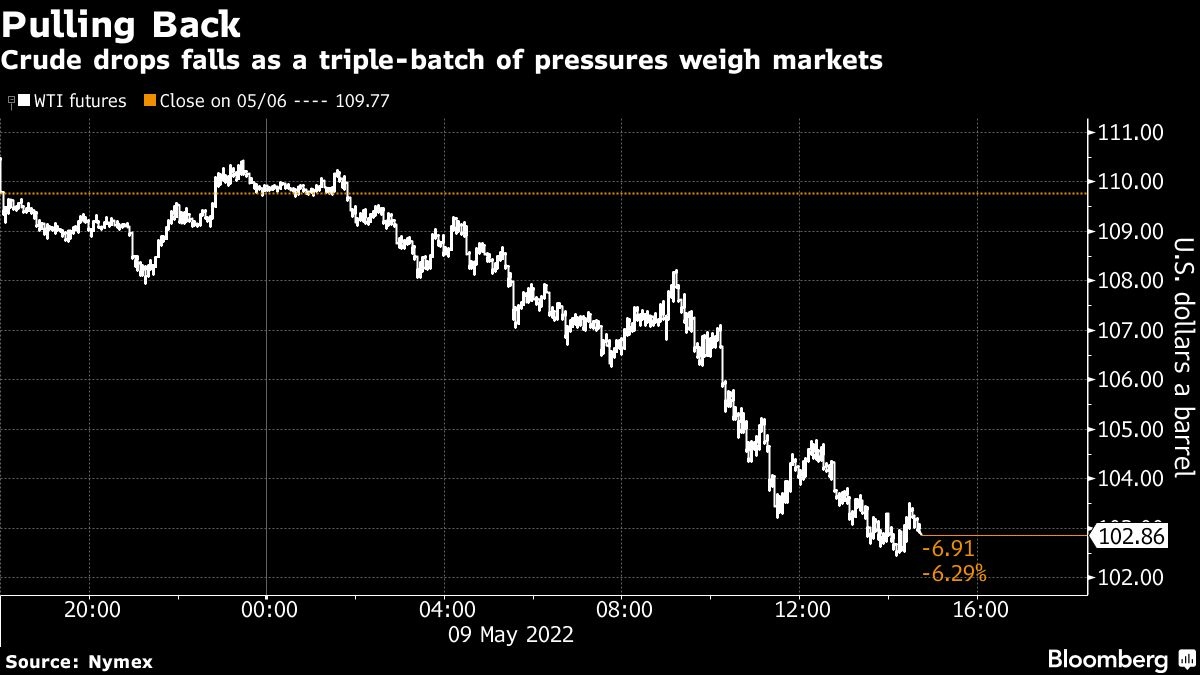 Crude has had a tempestuous 2022 as Russia’s invasion of Ukraine upended global commodity markets, lifting prices. The U.S. and the U.K. have already moved to ban imports of Russian fuel in response, but the weekend pledge by the G-7 will increase the pressure on Moscow further. Wider markets have also been roiled by the Federal Reserve’s aggressive rate hike path, adding volatility to crude trading.

Oil will continue to be “rangebound because there’s still not enough supply for the market currently,” Reddy said. “Barring a major COVID-19 spread, a supply shortfall will still exist.”

The EU will drop a proposed ban on its vessels transporting Russian oil to third countries, but will retain a plan to prohibit insuring those shipments, according to documents seen by Bloomberg and people familiar with the matter. Over the weekend the leaders of the Group of Seven countries made a vow to ban imports from Russia. But most nations cutting Russian purchases have so far stressed the need for orderly change, allowing much of the rest of the year to wind down.

Beyond the ongoing war, Saudi Arabia cut prices for buyers in Asia as COVID-19 lockdowns in China weigh on consumption in the top importer. State-controlled Saudi Aramco lowered prices for the first time in four months, dropping its key Arab Light grade for next month’s flows to US$4.40 a barrel above the benchmark.

Still, oil markets remain in backwardation, a bullish pattern marked by near-term prices commanding a premium to those further out. The spread between Brent’s two nearest December contracts touched US$13.99 a barrel, close to the level seen in the initial weeks after Russia began its invasion.