Watch out for energy and inflation and stay away from bubbles: Strategist

Oil advanced amid speculation that OPEC and its allies may not add as much supply to the market as previously planned if the U.S. releases crude reserves in coordination with other nations.

Futures closed up 1.1 per cent in New York on Monday. The OPEC+ group of producers may adjust plans to raise crude production if consuming countries go through with a coordinated release. Delegates said that even the modest output increase they have penciled in may now be re-evaluated when the group meets next week.

President Joe Biden is preparing to announce a release of oil from the nation’s Strategic Petroleum Reserve in concert with several other countries as soon as Tuesday, according to people familiar with the plan. The move, likely in conjunction with India, Japan and South Korea, would be an unprecedented effort by major oil consumers to tame surging energy prices.

“The battle lines are being drawn,” said John Kilduff, founding partner at Again Capital LLC.  “Certainly, OPEC and the Saudis can win this in that they are holding all the cards. They can keep more oil off the market than a SPR release can put on the market. If you see WTI get under US$70, then I would expect a response from OPEC+.” 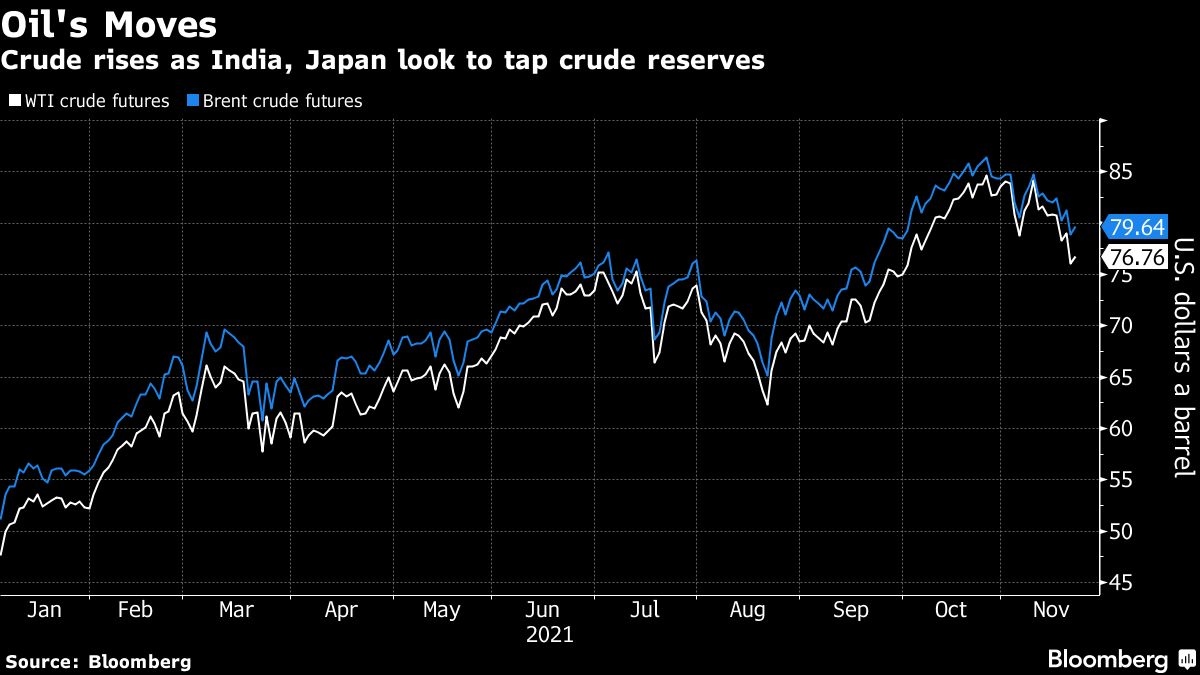 Oil has fallen from a high in late October as speculation increased that the U.S. and other countries would release reserves. Meanwhile, the return of virus restrictions in Europe suggests there could still be a threat to global energy demand from a resurgent Covid-19.

Biden has been talking about a possible release from the Strategic Petroleum Reserve for several weeks. The situation remains in flux and the plans could change but the U.S. is considering a release of more than 35 million barrels over time, according to one of the people. The pending announcement was described by people who requested anonymity prior to official statements.

Meanwhile, some OPEC+ countries are unhappy about the use of state reserves, designed to be deployed in an emergency, to cool this year’s rally in prices, the delegates said, declining to be identified because the discussions are private. OPEC+, led by Saudi Arabia and Russia, meets next week to discuss plans to increase production by an additional 400,000 barrels a day in December.

India has yet to decide on the timing and volume of releasing emergency oil stocks and a move will be a coordinated step with other major consumers, according to government officials with direct knowledge of the matter.

Japan’s Oil Stockpiling Act doesn’t allow for the sale of reserves due to high prices, but both the government and the private sector currently hold more reserves than the minimum required under the law, according to a report over the weekend in the Yomiuri newspaper, which cited government sources.

Tokyo has determined it can use its stockpiles legally as long as it taps surplus supply, according to a TV Asahi report, which cited an unidentified government official. It didn’t provide further details on how much oil would be released.