Oil is set up for another strong run: RBC commodity strategist

Oil’s early surge cooled as traders weighed the risks to demand from the omicron variant of COVID-19 and the potential response by OPEC against U.S. assurances it could release more crude if the need arises.

Futures in New York closed up 2.6 per cent on Monday, pairing initial gains of as much as 7 per cent from Friday’s rout. The World Health Organization warned the new strain could have severe consequences. Meanwhile, Biden Administration officials reiterated the government’s commitment to releasing crude from the Strategic Petroleum Reserve to contain prices.

The Organization of Petroleum Exporting Countries and its allies have moved technical meetings in order to give themselves time to review oil’s precipitous decline late last week. Saudi Arabia’s energy minister said he’s not concerned about the variant, and Russia said the group is waiting for more information. OPEC+ is scheduled to gather later this week and decide on its output plan for January, with a pause in supply hikes possible, according to Morgan Stanley.

While OPEC and its allies evaluate their next steps, the U.S. repeated its commitment to releasing oil from reserves. “We are not reconsidering,” White House Press Secretary Jen Psaki told reporters Monday at a briefing.

While the fundamental driver of oil’s sell-off on Friday was the emergence of omicron, by the end of the day everything from technical selling to options markets was contriving to push the market lower. Still, analysts from Goldman Sachs Group Inc. to Energy Aspects Ltd. said the move was overdone and traders are now waiting to see how severe the variant’s impact will be.

“It will take a couple of weeks to get a clear understanding how bad this new strain is,” Tariq Zahir, managing member of the global macro program at Tyche Capital Advisors LLC. “We could see selling come into any bounce we see until we get clarity.”

OPEC will likely take a cautious stance when it gathers this week, according to Vitol Group, the world’s biggest independent oil trader. More flight cancellations are also likely this week as a result of the variant, Mike Muller, the company’s head of Asia said. 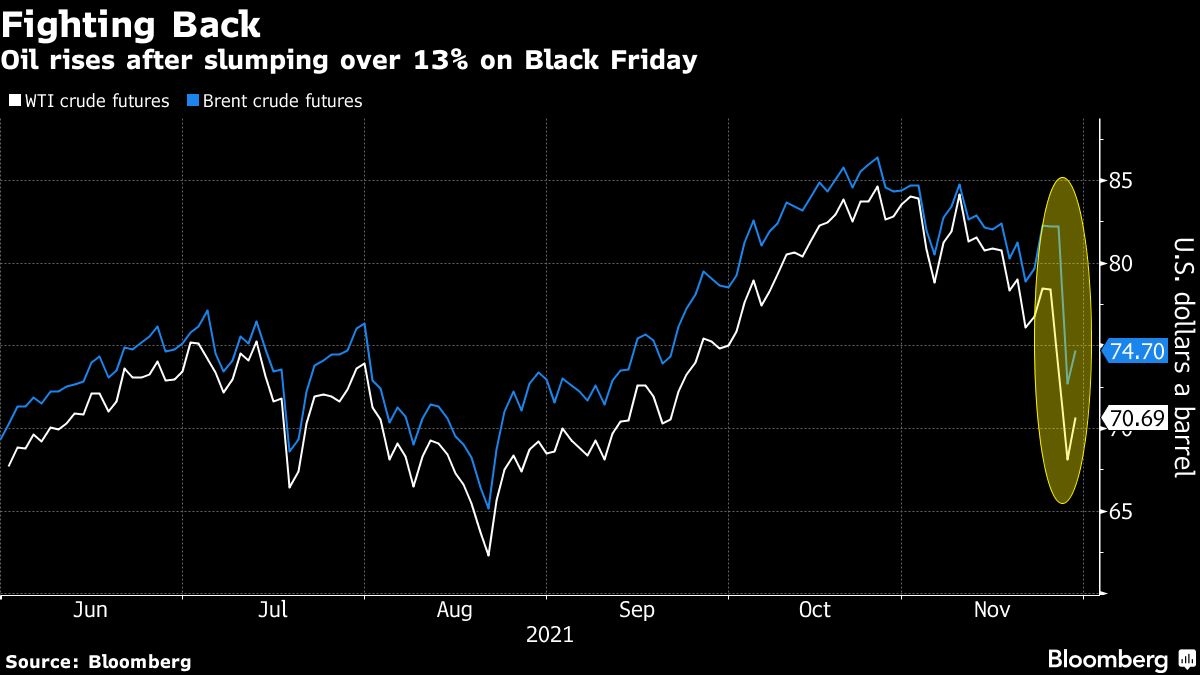 Crude had fallen over the past month as President Joe Biden signaled a potential strategic crude in response to rising energy prices. Last Tuesday the White House announced a crude release of 50 million barrels in coordination with China, Japan, South Korea and the U.K. The landmark plan fell short of market expectations, though the Biden Administration’s energy envoy said Monday the U.S. is ready to release more crude if needed.

“I think we wanted to do something that was impactful for the market and that also had the ability and the flexibility to allow us to do that again should the need arise for the American economy,” U.S. State Department Senior Advisor Amos Hochstein told CNBC Monday.

As a result of the slump, oil market volatility has blown out. One gauge of price fluctuations climbed to its highest level since May 2020. That also accompanied a surge in trading volumes as prices retreated.

The sell-off wasn’t just concentrated on the front end of the oil curve. Brent for December 2022 shed almost US$8 on Friday and had clawed back about US$1 of that loss on Monday. The level of backwardation -- a bullish structure indicating tight supply -- in the futures curve also fell sharply.