Oil prices tumbled lower as a unexpectedly large increase in U.S. crude inventories added to worries about a supply glut ahead of a meeting between top exporters Russia and Saudi Arabia.

Futures fell 2.5 per cent in New York, following a report by the Energy Information Administration that domestic oil supplies climbed for the 10th straight week, fed by rising imports.

Traders remain focused on the meeting expected at the G-20 summit in Argentina between Russian President Vladimir Putin and Saudi Crown Prince Mohammed bin Salman. OPEC and its allies are mulling an output cut of 1 million barrels a day or more at a meeting next week in Vienna, as the group looks to stabilize prices that have plunged more than 30 per cent since October.

“Everybody’s looking to the OPEC meeting to determine a sense of where prices are going to go and that will depend largely on how severe the cuts are," said Adam Wise, who manages a US$9 billion oil and gas portfolio for John Hancock Financial Services Inc. in Boston.

West Texas Intermediate for January slid US$1.27 to US$50.29 a barrel on the New York Mercantile Exchange. The U.S. benchmark’s 14-day Relative Strength Index remains in oversold territory.

Brent for January settlement declined 2.4 per cent to US$58.76 a barrel on London’s ICE Futures Europe exchange. 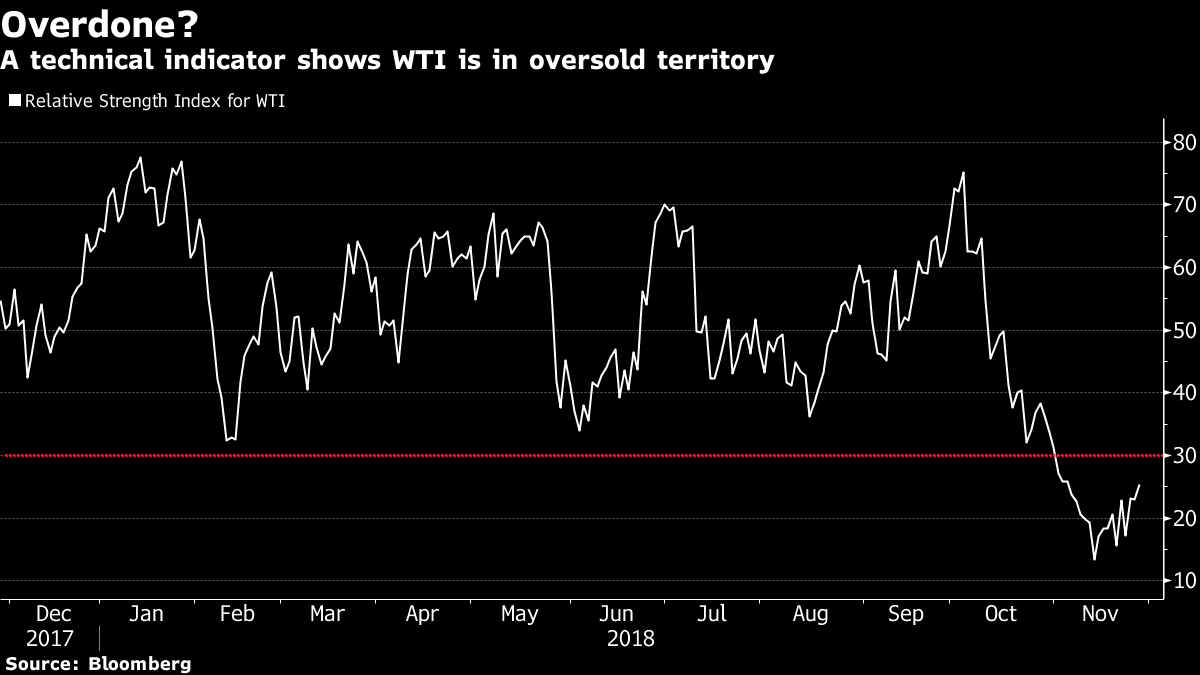 Saudi Arabia and Nigeria are confident that the Organization of Petroleum Exporting Countries and its partners will succeed in stabilizing prices, energy ministers Khalid Al-Falih and Emmanuel Ibe Kachikwu told reporters in Abuja. But Al-Falih was less definitive than in previous comments and didn’t mention an actual production cut.

Adding uncertainty, Putin said in Moscow that current Brent prices around US$60 a barrel are “ absolutely fine” for his country. Two weeks ago, he said a level of US$70 suited Russia.

“It’s an elevated build relative to where consensus was on crude," Nick Holmes, a director at Kansas-based Tortoise, which oversees a US$16 billion energy portfolio. “People expected as refinery maintenance started to wind down we’d start to see some more draws."

Other oil-market news: Gasoline  futures dropped 1.6 per cent to US$1.3979 a gallon. The  EIA found gasoline stocks fell 764,000 barrels, less than the median estimate of a 1 million decline predicted by analysts in the  Bloomberg survey.  America’s biggest shale explorers are heading into the new year more exposed to oil-price swings just as the market sells off, based on data on  hedging contracts.