Oil pared gains with prices struggling to break out of its recent trading range as the market considers the jagged outlook for global fuel consumption.

Futures in New York closed 0.6 per cent higher on Monday after rising as much as 2.4 per cent during the session. An uneven consumption outlook continues to hold oil prices back from rallying significantly past US$60 a barrel. Even as fuel demand strengthens in countries like India and the U.S., it is far from a steady recovery worldwide as COVID-19 infections surge and lockdowns are renewed in parts of the Middle East and Europe.

“The concerns over economic recovery are just too strong” for a sustained push higher at this point, said Gary Cunningham, director at Stamford, Connecticut-based Tradition Energy. “We need to see some real positive numbers come out of economic growth before we can push away from US$60 on WTI.” 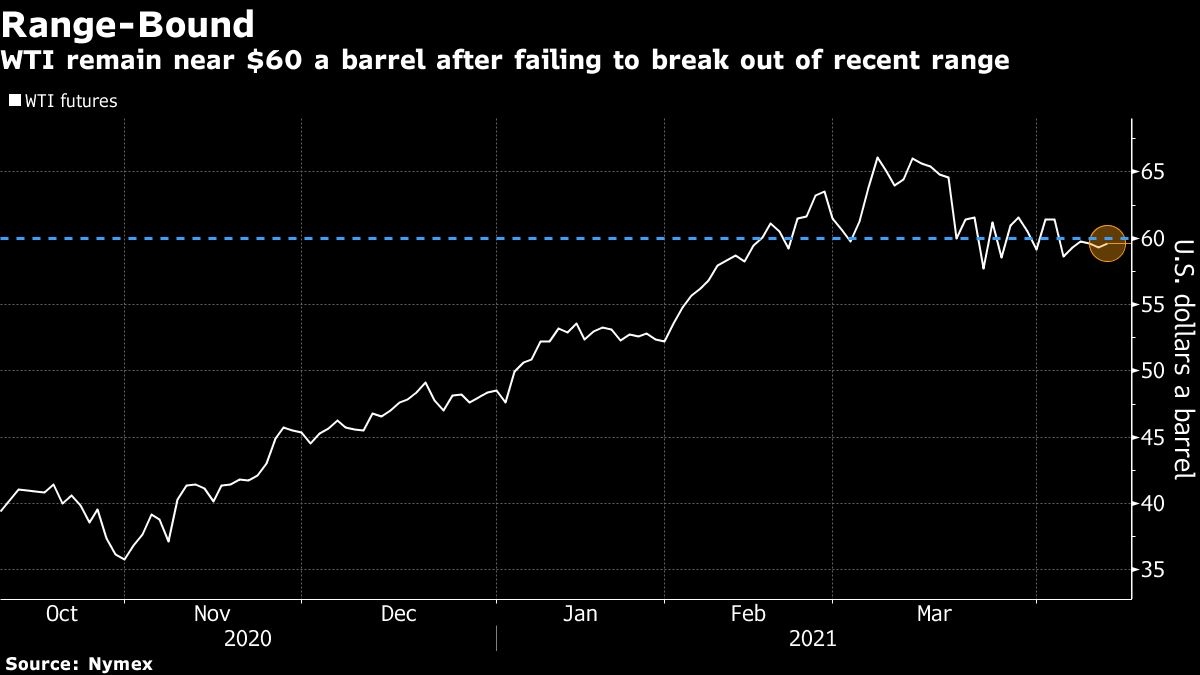 Meanwhile, Yemen’s Houthis said they attacked oil facilities in Saudi Arabia, as the group steps up strikes on the kingdom. While such attacks have increased this year, they rarely claim lives or cause extensive damage.

Oil in New York has remained trapped near US$60 a barrel since mid-March as traders look for more signs of a recovery in consumption from the pandemic. Trading volumes have slumped -- falling below their 15-day average every day last week -- as the market awaits a breakout. In the meantime, the OPEC+ alliance agreed to add more barrels from May.

“It is U.S. optimism that is helping the oil market, as developments in other parts of the world are not moving toward the same direction,” said Louise Dickson, an oil markets analyst at Rystad Energy AS. “Populous countries like India and Brazil are seemingly getting deeper in trouble than ever before, failing to deliver on hopes for a quick economic recovery.”

There are already signs emerging of the potential impact of a steady reopening in the U.S. on consumption, even in the beleaguered airline industry. United Airlines Holdings Inc. said it saw an acceleration in customer demand in March, while U.S. air passenger numbers remain near their highest level since March. However, the downside for jet fuel refining margins will likely last into 2022 with international air travel lagging the recovery in the U.S., according to Bank of America Global Research.

The broader outlook for the oil market may be getting weaker further down the line, Morgan Stanley analysts Martijn Rats and Amy Sergeant wrote in a report. That’s because Iranian supply may return quicker than expected, while U.S. drilling activity has continued to increase. It means price gains later this year could be limited, they said.

Still, a revival in the 2015 nuclear deal will have to overcome increasing hurdles. In the latest potential complication for talks, the Persian Gulf country said it will respond to attacks on its largest uranium enrichment plant with further development of nuclear progress.

--With assistance from Alex Longley and Grant Smith.