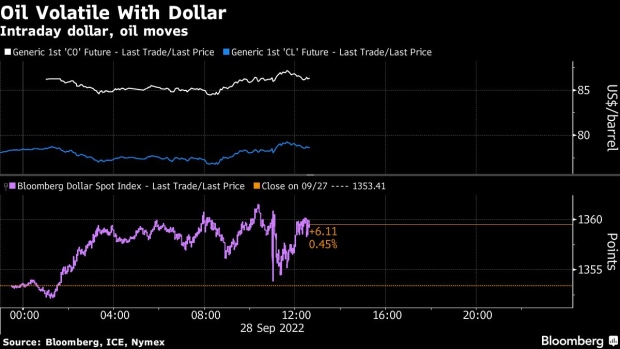 A row of fuel nozzles at a Pilipinas Shell Petroleum Corp. gas station in Las Pinas, the Philippines, on Wednesday, Sept. 7, 2022. Pilipinas Shell plans to have retail shops and restaurants in a third of its gasoline refilling stations by 2025 as its seeks to boost revenues beyond fuel. Photographer: Iya Forbes/Bloomberg , Bloomberg

(Bloomberg) -- Oil jumped the most since July as an escalating energy conflict with Russia and declining US inventories raised the prospect of supplies tightening in the near term.

West Texas Intermediate settled above $82 a barrel after rising 4.7%, the most in a single day since mid-July. US crude stockpiles fell last week for the first time in a month as some regional fuel stockpiles declined precariously. The European Union announced a new round of sanctions against Russia while three ruptured pipelines in the Baltic Sea are widely suspected to be the result of sabotage. A weaker US dollar also bolstered Wednesday’s rally.

“The damage to Nord Stream is very concerning both from a supply issue and a political issue in that it assures supply from Russia is not reliable,” said Dennis Kissler, senior vice president at Bok Financial Securities. “It raises concerns that all energy prices are vulnerable to price spikes if we see an early start to a harsh winter.”

Oil futures have been volatile for months amid lackluster liquidity. Prices stand almost 40% lower than their peak earlier this year amid a rising sense of certainty that central bank efforts around the world to contain inflation will lead to an economic slowdown. However, geopolitical uncertainty still threatens supplies as traders watch for any hint of a slowdown.

US data showed some signs of demand improving in weekly figures. Crude inventories fell 215,000 barrels last week, the US Energy Information Administration reported. West Coast gasoline stockpiles fell to their lowest in 10 years and New England’s distillate stocks, which include diesel and heating oil, fell to an all-time low for this time of year.

Russia, which has to discount its barrels because of Western sanctions, is pushing OPEC and its allies to cut their collective output by 1 million barrels a day when the producer nations meet next week, Reuters reported Tuesday. A production cut would further tighten supplies and could rally prices. OPEC and its partners may be amenable to slashing output as some member countries see their revenues shrink from cheaper oil.

Elsewhere, some of China’s top refiners are expecting a better economy in the winter, a bullish signal for oil. Demand in the country, which is the world’s biggest crude importer, has remained weak for years because of its Covid Zero policy.