Oil posted its first back-to-back weekly loss since early April as fears of a demand-sapping global recession and tighter US monetary policy ripped through commodity markets to spur a broad sell-off.

West Texas Intermediate fell 1.7 per cent for the week to settle at US$107.62. US Federal Reserve Chair Jerome Powell’s hawkish testimony to Congress earlier in the week overshadowed a fundamentally tight market.

Prices clawed back some of the week’s losses Friday as the University of Michigan’s final June reading of longer-term consumer inflation expectations settled back from an initially reported 14-year high, potentially reducing the urgency for steeper Federal Reserve interest-rate hikes.

“Wall Street remains optimistic that inflation will improve over the next year, and that is good news for risky assets, especially commodities,” said Ed Moya, senior market analyst at Oanda. 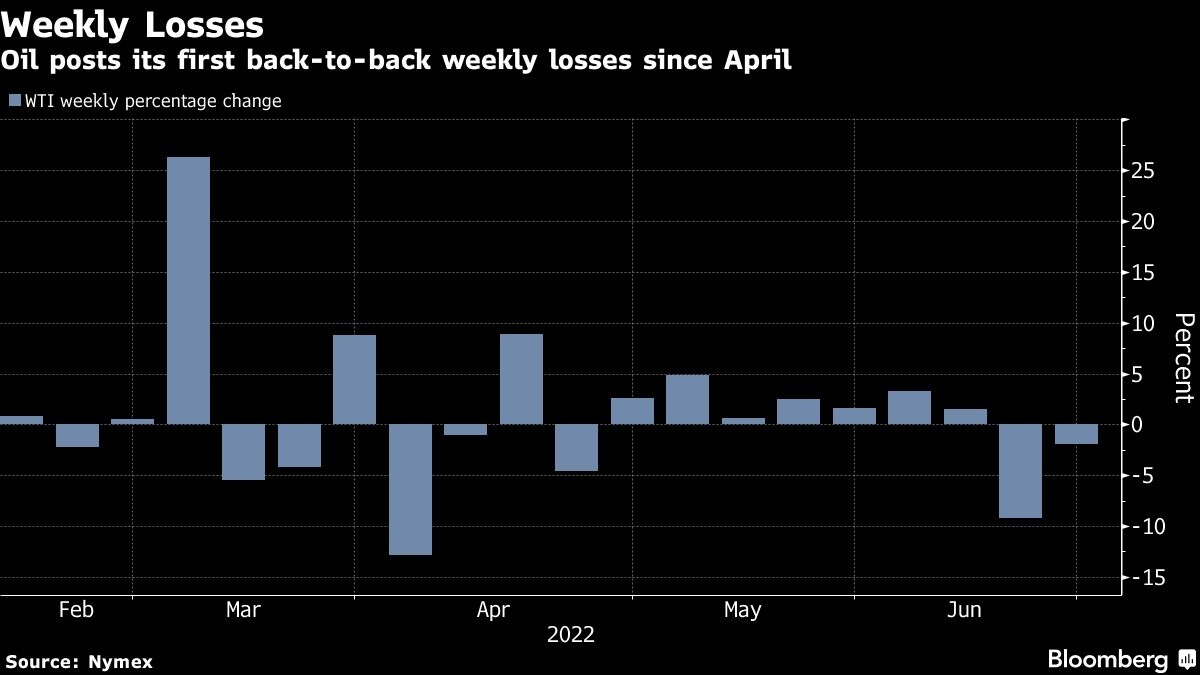 Oil’s rally since Russia’s invasion of Ukraine cooled earlier this month on escalating concern over a global slowdown as central banks, including the US Federal Reserve, boosted interest rates to quell raging inflation. Prices have sunk despite signs that energy markets remain tight in the near term as the war in Ukraine drags on and supply risks persist.

Despite declining headline prices, the market remains in backwardation, a bullish pattern in which near-term prices trade above longer-dated ones, has grown in recent days. Brent’s prompt spread -- the difference between its two nearest contracts -- was US$4.02 a barrel, compared with US$2.73 a week ago.

That in part reflects still-strong demand for real-world barrels. Cargoes for Asian buyers are fetching giant premiums to their benchmarks for August loading, signaling confidence in demand over the next few months.

In the Middle East, Murban crude was in a backwardation of more than US$10 over its nearest two months, an unprecedented value that indicates major supply scarcity. In Houston, physical barrels of WTI traded at US$2.75 a barrel over futures, the strongest premium in two years, amid short-covering before rollover of July pipeline cycle Friday, according to people familiar with matter.