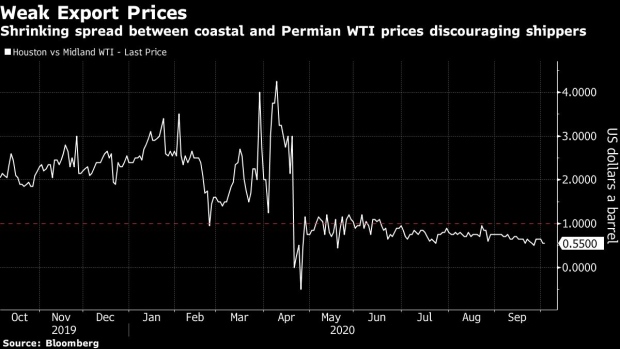 (Bloomberg) -- U.S. oil pipeline operators are slashing fees to encourage customers in Texas to keep using their networks to ship barrels to the Gulf Coast as the pandemic wreaks havoc on profits.

Kinder Morgan Inc. is offering discounts of about 50% on the Eagle Ford pipeline for some existing customers, according to people familiar with the matter. Magellan Midstream Partners LP is negotiating lower tariffs on the Permian’s BridgeTex system for certain users whose contracts are up for renewal at the end of 2020, they said. Energy Transfer LP plans a volume incentive program for those who qualify on its Permian Express 2 and 3 pipelines.

The discounts reflect efforts by pipeline companies to combat sluggish oil consumption and a drilling slowdown in prolific regions such as the Permian Basin after they expanded capacity in recent years. Last month, Enterprise Products Partners LP shelved plans for a major crude pipeline which would have added 450,000 barrels a day of capacity to a system that carries oil from the Permian to the Gulf Coast.

Kinder Morgan and Energy Transfer declined to comment. Magellan is always working with customers to meet their needs in any market environment, Bruce Heine, a company spokesman, said by email.

The industry responded with similar discounts during previous slowdowns such as the 2014-2015 downturn, said Jon Sudduth, senior North American crude analyst at Energy Aspects in Houston. At that time, U.S. crude prices crashed after Saudi Arabia flooded the market in an attempt to kill off what the Kingdom saw as rising competition from booming North American shale fields.

The lack of demand for pipeline capacity has reduced the premium for oil delivered to export hubs on the Gulf Coast to under $1 a barrel from around $3 a barrel at the start of the year. That’s not enough to cover transport costs for most Permian pipelines.

While shippers regard tariffs as sunken costs, there are other variable charges, said Sudduth. “If the spread between Permian oil prices and those on the Gulf doesn’t cover the variable costs, it would mean losing not just on the cost of tariff, but those variable charges as well,” he said.