Oil in New York posted the biggest monthly loss since October as investors weighed the prospect of additional OPEC+ production and the restoration of crude output in the U.S. after Hurricane Ida.

West Texas Intermediate ended 1.1 per cent lower on Tuesday, and declined 7.5 per cent this month. Gulf of Mexico crude producers are expected to resume service gradually after Ida crashed ashore in Louisiana over the weekend. Refineries are expected to return to operations more slowly.

There’s optimism that the industry will bounce back sooner than later, which is causing crude prices to weaken, said Robert Yawger, director of the futures division at Mizuho Securities. 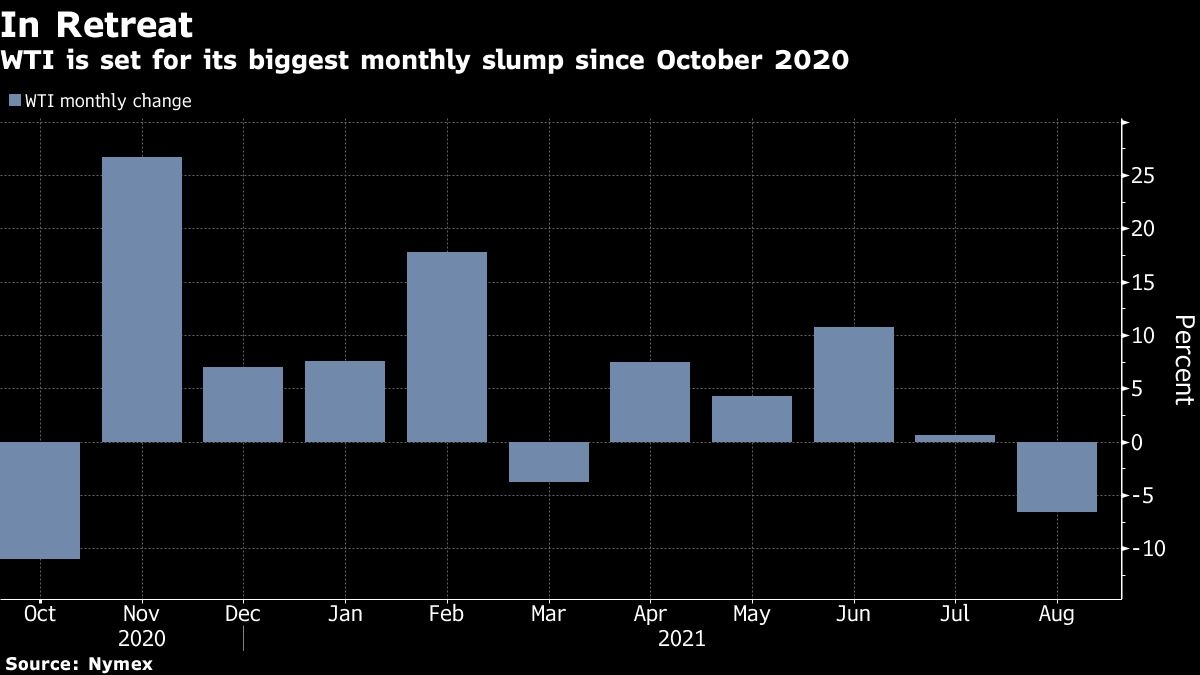 Some Gulf Coast refiners have started seeking fuels such as gasoline while they await the return of their plants that were shut for the storm. Some affected Louisiana refiners are also using their Texas plants to deliver barrels owed to customers, according to people familiar with matter. Fuel stocks in the U.S. Gulf are flush because gasoline demand this year is below normal. Currently gasoline inventories are above the 10-year average, based on U.S. government data.

Separately, the Organization of Petroleum Exporting Countries and its allies will meet Wednesday to assess the global market and prospects for demand as the pandemic grinds on. The alliance forecasts a supply deficit this year, even as it continues to add production. A surplus is expected to return in 2022.

Oil has endured a turbulent August, rising and falling on alternate weeks, as investors reacted to the latest twists in the global health crisis and swings in the dollar. U.S. benchmark crude slumped this month despite a steady draw in stockpiles, and some nations have managed to control virus outbreaks driven by the delta variant.

There are “some pre-OPEC+ jitters and the realization that Hurricane Ida has a short-term negative impact on demand, while supply should not be impacted,” said Ole Hansen, head of commodities strategy at Saxo Bank A/S.

Energy companies affected by Ida have moved to restore operations. Colonial Pipeline Co. said Tuesday that it resumed service on two of its key conduits that send fuel from the Gulf Coast to the Northeast.

Data in Asia continues to show the impact of the delta variant virus outbreak in recent months. On Tuesday China’s official manufacturing purchasing managers’ index fell to 50.1 from 50.4 in July, slightly lower than the median estimate in a Bloomberg survey of economists. That suggests Beijing’s curbs on mobility to check the spread of the delta variant may have affected the pace of growth. Meanwhile, Japan’s oil demand in July was down about 8 per cent from 2019 levels, according to Bloomberg calculations from government data.