Oil and gas investors in for a feast of cash and capital returns: Stifel FirstEnergy's Fitzmartyn

Oil is set for a fifth straight weekly gain with the global energy crunch set to boost demand for crude as stockpiles decline from the U.S. to China.

Futures in New York rose on Friday and are up about 2.4 per cent this week. The global benchmark Brent traded at its highest intraday level in nearly three years. Global onshore crude supplies sank by almost 21 million barrels last week, led by China, according to data analytics firm Kayrros, while U.S. inventories are near a three-year low. The surge in natural gas prices is expected to force some consumers to switch to oil, tightening the market further ahead of the northern hemisphere winter.

“The market is pricing in a prolonged impact of supply disruptions, and the likely storage draws that will be needed to fulfill refinery demand,” said Louise Dickson, oil markets analyst at Rystad Energy, in a note. In terms of oil demand, “no new lockdowns in Europe, robust recovery in China road activity, and the U.S. nixing its ban on foreign travelers from November 2021, all lift prospects for upside in the coming quarters.” 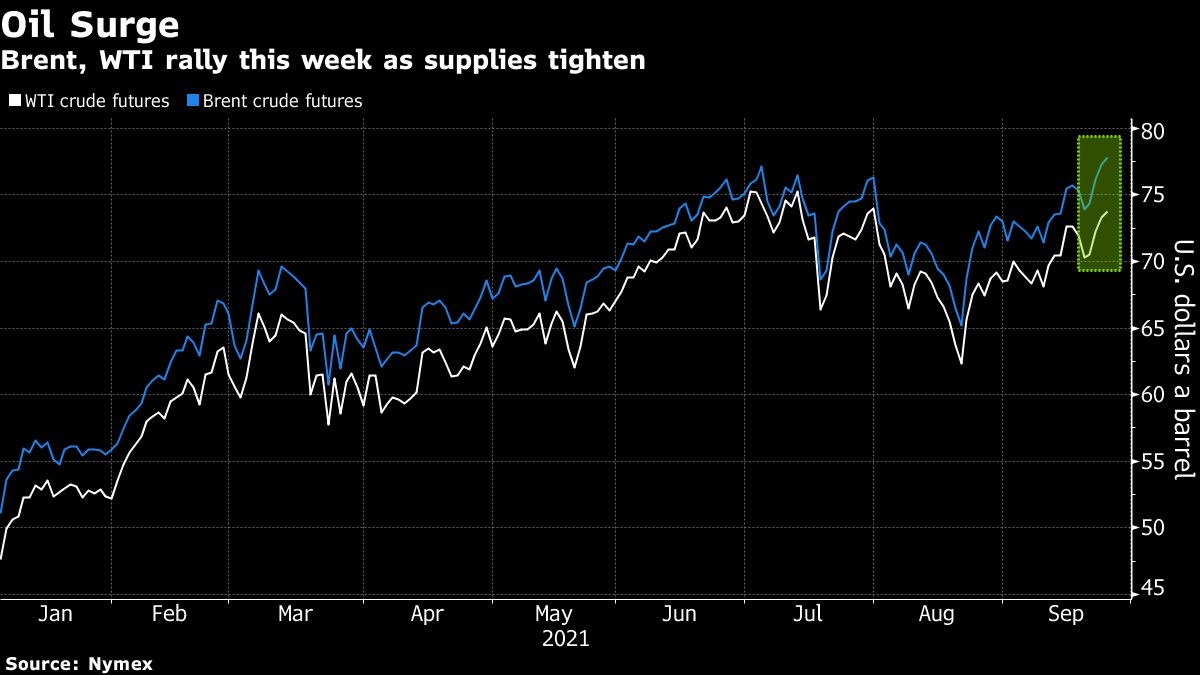 Oil has steadily climbed higher this month after a period of COVID-induced demand uncertainty, with some of the world’s largest traders and banks predicting prices may climb further amid the energy crisis. Global crude consumption could rise by an additional 370,000 barrels a day if natural gas costs stay high, according to the Organization of Petroleum Exporting Countries.

Various underlying oil market gauges are also pointing to a strengthening market. The key spread between Brent futures for December and a year later is near US$7, the strongest since 2019. That’s a sign traders are positive on the market outlook.

At the same time, the premium options traders are paying for bearish put options is the smallest since January 2020, another indication that traders are less concerned about a pullback in prices.

Meanwhile, China sold crude oil from its strategic petroleum reserves for the first time via auction in a historic effort to curb raw materials prices, with a unit of PetroChina Co. Ltd. and Hengli Petrochemical Co. Ltd. securing volumes.