Oil rose this month with a slew of positive economic data and signs of a budding fuel consumption revival in key economies offsetting a worsening coronavirus crisis elsewhere.

Futures in New York rose this week, extending its monthly gain to 7.5 per cent. The near-certain likelihood of higher fuel consumption in the U.S., China and the U.K has brightened the overall demand outlook, even as a resurgent pandemic in countries such as India, Brazil and Japan cloud those prospects. OPEC and its allies see world consumption rebounding by 6 million barrels a day this year, while Goldman Sachs Group Inc. this week said demand could post a record jump as vaccination rates increase.

“The U.S. is going to lead the demand recovery” and “now that Covid cases are declining across most of western Europe, there’s excitement around a strong pickup in global economic activity and improved air travel in the coming months,” said Edward Moya, senior market analyst at Oanda Corp. But “to take out the March highs, the situation in India needs to be heading in the right direction.” 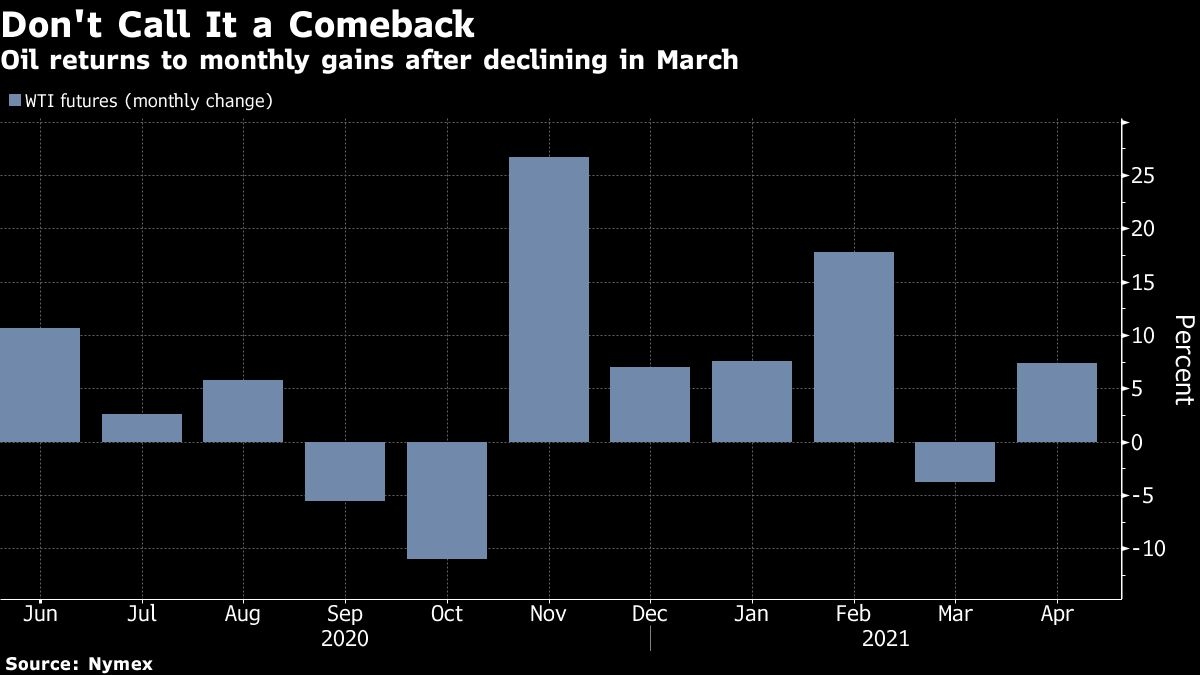 Green shoots of a revival in fuel consumption are sprouting around the world. Travel across China is expected to pick up over an extended Labor Day holiday. In the U.S., a string of real-time data pointing to an economic rebound taking hold in the world’s largest oil consumer has stoked optimism around demand in coming months.

Oil’s overall advance is in keeping with a broad-based surge in interest in commodities this week, driven by optimism in key economies and tightening supplies of raw materials. That’s pushed the Bloomberg Spot Commodity Index to the highest level since 2012 in previous sessions.

Still, it will likely be a bumpy road ahead for prices as the world’s economies reopen at varying paces. U.S. benchmark crude futures on Friday posted their largest daily loss in almost four weeks, with raw materials and U.S. equities cooling from a scorching rally. Further weighing on prices was a strengthening dollar, which makes commodities priced in the currency less attractive.

A viral onslaught in India is the most notable threat to a worldwide oil recovery. Imports from the South Asian country could fall by over 1 million barrels a day in the coming weeks, if not three times more, consultant Kpler said in a report Friday. The loss of demand is showing up in U.S. physical markets, where sour crude differentials have weakened this week amid lower demand from India.

“People are gradually getting back to their old consumption ways in terms of oil, but there are a lot of things that could upset the apple cart,” said James Bradford, portfolio manager of Vivid Capital Management’s Energy Fund. “We are chewing through the inventory surplus over the five-year average pretty quickly,” but that’s before OPEC+ returns output, Iran further increases production and India imposes “lockdowns of any serious consequence.”