Oil declined the most this week since March as a resurgence of Covid-19 threatened the outlook for global fuel consumption in the near-term.

While futures in New York edged up on Friday, yet but settled 3.7 per cent lower this week. The rapidly spreading delta variant is triggering renewed restrictions on movement as it sweeps across the globe. The U.K. is considering stricter measures due to a surge in cases, Singapore is shutting hundreds of nightlife venues, and in the U.S., a mask mandate has been reinstated in Los Angeles County.

At the same time, crude markets face the prospect of extra supplies from the OPEC+ coalition, as the United Arab Emirates and Saudi Arabia repair a rift that has stymied the group’s decision-making process. A stronger dollar has also dimmed the appeal of commodities priced in the U.S. currency this week.

“It was a one-two punch for the petroleum complex this week: the compromise agreement between OPEC+ and the U.A.E. signaled that more supply will be forthcoming to the market, after all,” said John Kilduff, a partner at Again Capital LLC. “The other factor is the impact of COVID-19 delta variant, which is a threat to the pace of demand recovery.” 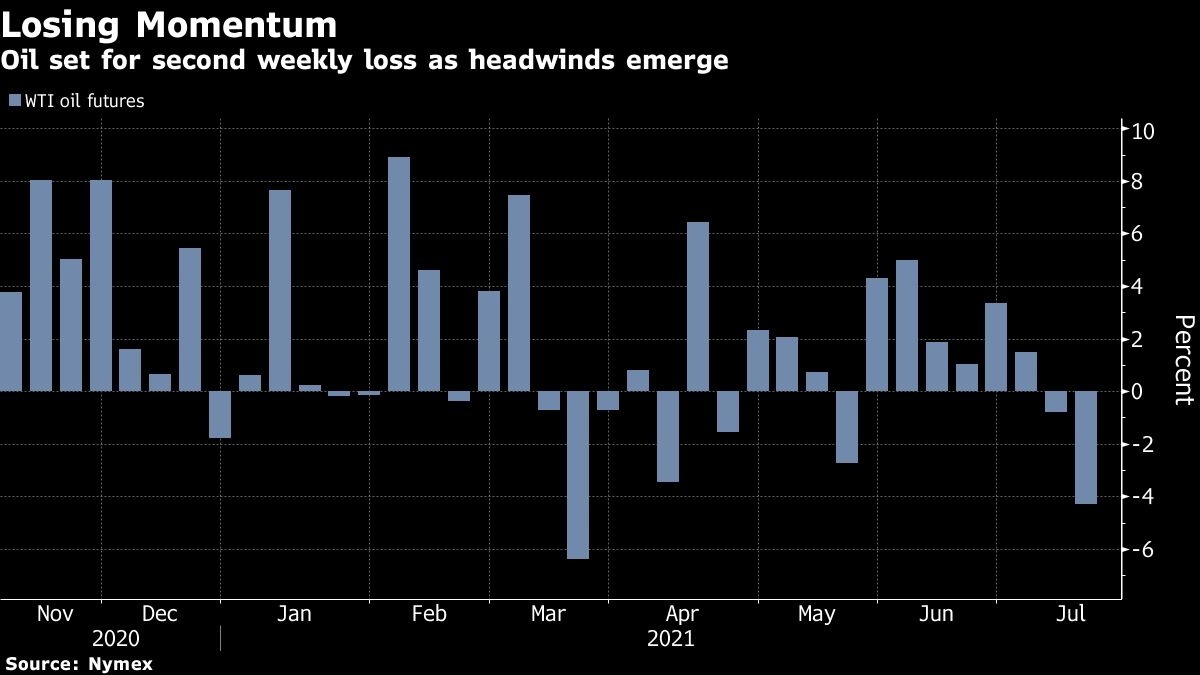 Despite the pullback, crude has surged about 13 per cent over the last three months as a global vaccine rollout helps restore economic activity. Forecasters from the International Energy Agency to Citigroup Inc. predict that the market will get tighter in coming months.

Still, concerns over demand in the near-term are causing the structure of the U.S. crude market to weaken. While there’s still a premium on the most immediate contracts -- a condition known as backwardation that signals tight supplies -- it has eased significantly in some parts of the forward curve. The prompt premium is at just 25 cents a barrel on Friday, from 75 cents a week ago.

“If in the coming weeks, places that have re-opened start to back-peddle,it will be read as negative for oil demand,” said Leo Mariani, an analyst at KeyBanc Capital Markets Inc.

Meanwhile, investors are gearing up for expiration of the Nymex August futures contract on July 20, with open interest, which reflects the quantity of contracts held at the end of the trading day, declining more than 60 per cent since the beginning of the week.

Traders are awaiting a meeting date to be set among OPEC+ producers after signals earlier this week of progress made between the UAE and Saudi Arabia in resolving its standoff. Last week, OPEC and its allies were forced to abandon a tentative deal to boost oil production in monthly installments of 400,000 barrels a day because of last minute objections from the UAE.