Drivers will get some relief at the pumps next week, but it will be short lived: Roger McKnight

Oil posted its first weekly loss in two months as traders weighed heightened geopolitical tensions over Ukraine against the potential for Iranian barrels to be added to the market.

West Texas Intermediate closed down near US$91 a barrel on Friday. U.S. crude fell 2.2 per cent this week, fluctuating as prices of commodities from gas to metals and food swung with every twist and turn in the standoff between the West and Russia.

The U.S. ramped up warnings of a possible Russian attack on Ukraine, Russian officials continued to reiterate that no invasion was underway and none was planned. U.S. Secretary of State Antony Blinken and Russia Foreign Minister Sergei Lavrov have agreed to meet for talks next week.

Even with its most recent leg higher, oil’s recent rally has shown signs of cooling. The North Sea market has seen differentials for physical barrels ease, while refining margins have come under pressure. One oil-focused exchange-traded fund saw its biggest daily withdrawal since July 2020.

Additionally, mounting speculation that Iran’s nuclear deal may be revived is damping some of the bullish signals. The deal could pave the way for the removal of U.S. sanctions on the nation’s crude exports, adding much-needed supply to the market. 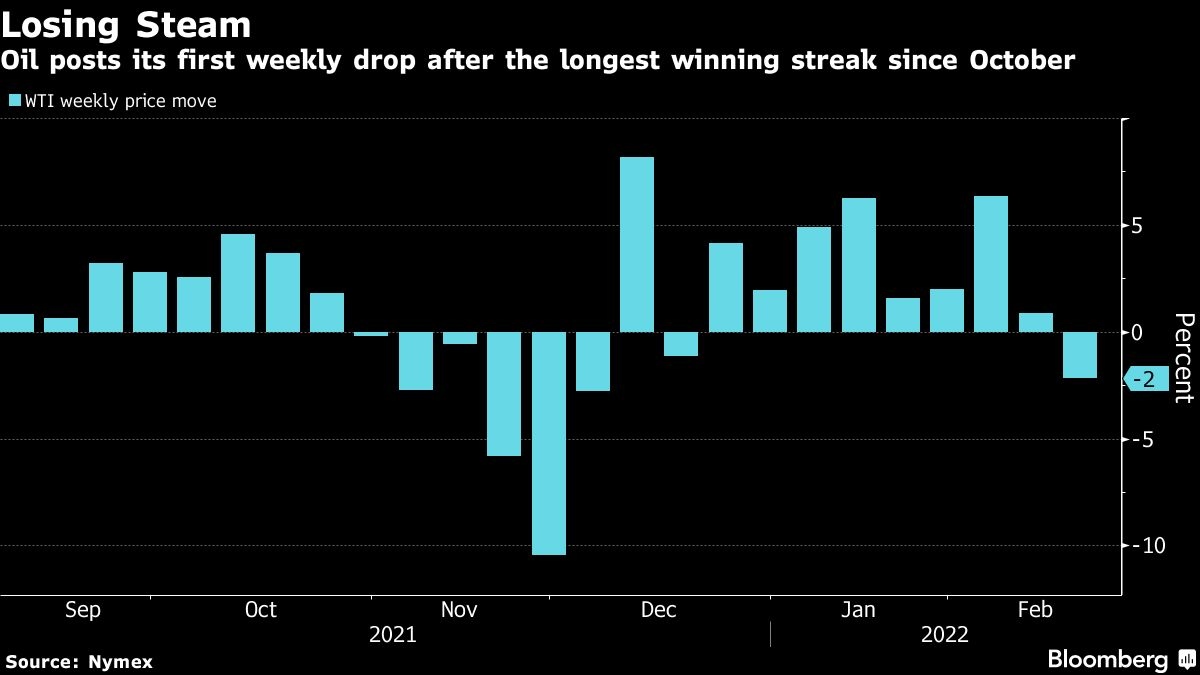 WTI’s prompt spread--the difference between its nearest two contracts-- dropped to 86 cents, down sharply from its US$2 premium earlier this week. The narrower spread signals that traders expect supplies to be somewhat less tight next month amid muted exports. March crude futures expire on Tuesday.

Crude rose to the highest since 2014 this week in a blistering rally underpinned by roaring demand, constrained supply, and declining inventories. The underlying market is one of the strongest its been in years, and Dated Brent, a more immediate measurement of oil prices, hit US$100 a barrel. While the market remains strong, prices have weakened as the geopolitical risk premium has declined in the past few days.

“It doesn’t matter how tight the oil market is right now, energy traders are taking risk off the table,” said Ed Moya, Oanda’s senior market analyst for the Americas. “In addition to the Ukraine situation, Iran nuclear talks continue to head in the right direction, potentially paving the way for more barrels of crude to hit the oil market later this year.”

Issues surrounding Iran’s nuclear accord are set to be discussed at a key transatlantic security meeting in Munich this weekend. A lifting of sanctions on oil shipments from the Persian Gulf producer would be a later phase of the agreement, Reuters reported, citing a draft text and unidentified diplomats.