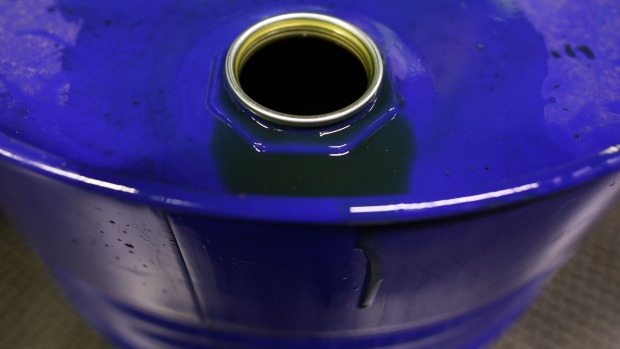 Excess fluid sits on the rim of a barrel of oil based lubricant at Rock Oil Ltd.'s factory in Warrington, U.K., on Monday, March 13, 2017. Oil declined after Saudi Arabia told OPEC it raised production back above 10 million barrels a day in February, reversing about a third of the cuts it made the previous month. , Bloomberg

Oil posted the longest run of weekly gains since April as prices followed equities higher and a government report showed U.S. crude inventories falling to the lowest in two months.

Futures in New York were little changed, clinging to a three-month high Friday. The Energy Information Administration reported that oil inventories fell 5.47 million barrels while supplies at the key Cushing, Oklahoma, storage hub declined to the lowest in more than a year. Crude also tracked the S&P 500, which hovered near an all-time high.

“Oil will likely correlate to equities” through the remainder of the year and even see multimonth highs “but the situation is not sustainable for much longer,” said Robert Yawger, futures director at Mizuho Securities USA LLC in New York. “The market is overbought.”

Oil is up about 12% this month after the U.S. and China made a breakthrough in their prolonged trade dispute and as the Organization of Petroleum Exporting Countries and its allies agreed to deepen output cuts.

West Texas Intermediate for February delivery rose 4 cents to settle at US$61.72 a barrel on the New York Mercantile Exchange. The U.S. benchmark ended the week 2.1% higher, marking its fourth weekly advance.

Brent for February settlement rose 24 cents to close at US$68.16 a barrel on the ICE Futures Europe exchange. The global benchmark crude ended the week 3.1% higher and traded at a US$6.44 premium to WTI.

Gasoline inventories rose by 1.96m barrels, more than reported by the industry-funded American Petroleum Institute Tuesday. Supplies are at the highest seasonal level since 1990, despite refineries running hard.