Canada should be a big part of the solution for long-term global oil supply: Oil industry veteran

Futures in New York fell 4.2 per cent for the five-day period to settle at US$104.70 after swinging by more than US$16 a barrel throughout the week. The price gyrations have followed rapid developments surrounding the war in Ukraine, exacerbating volatility amid supply concerns and conflicting news in peace talks that sent oil surging by the most in 16 months Thursday. The IEA said Friday that oil markets are in an “emergency situation” that could get worse, days after stating that the potential loss of Russian oil exports “cannot be understated” in their monthly report.

Fundamentally, oil markets remain tight but “until we get some resolution on what Russia’s ultimate goal here is, you’re going to have a lot of sentiment and a lot of volatility in oil prices,” said Rob Thummel, portfolio manager at Tortoise, a firm that manages roughly US$8 billion in energy-related assets. There is at least US$20 of geopolitical premium currently priced in, he added. 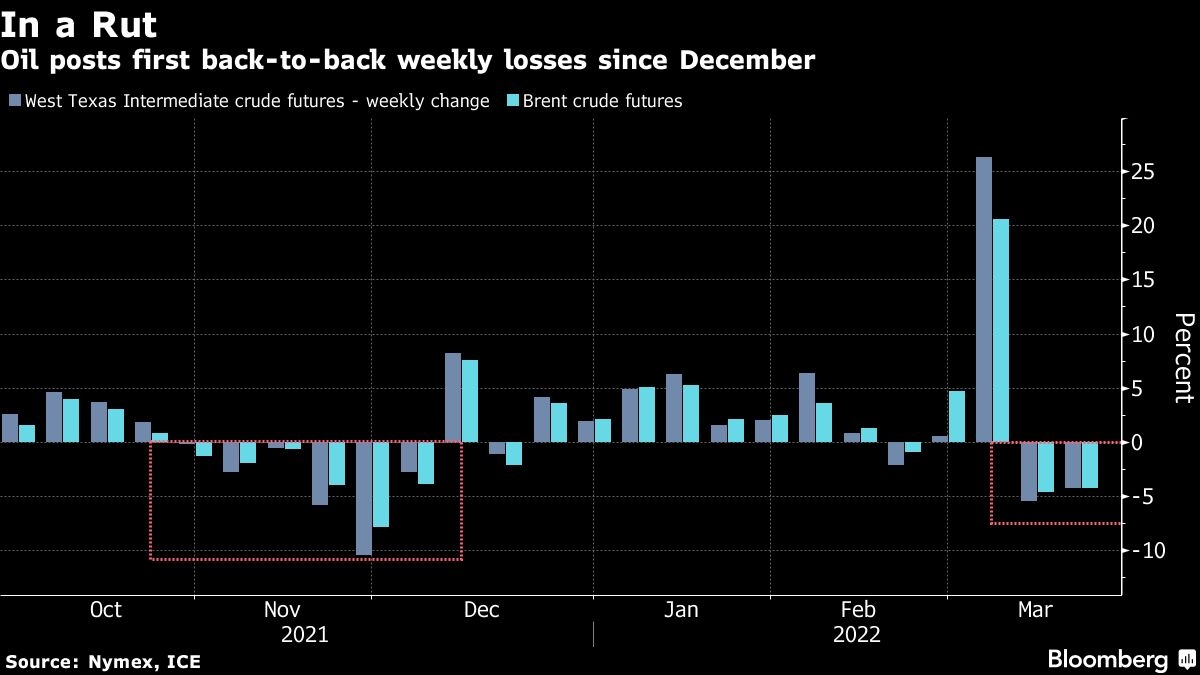 A renewed COVID-19 outbreak in China has compounded the moves, as the country imposes some of its heaviest virus-related restrictions since early 2020. President Xi Jinping pledged to reduce the economic impact of his COVID-fighting measures, signaling a shift in a longstanding strategy that has minimized fatalities, but weighed heavily on the world’s second-largest economy.

The rise in oil prices, along with other commodities exported by Russia, has also fanned inflation fears as governments try to encourage growth after the pandemic. The Federal Reserve this week raised interest rates and signaled further hikes to tackle the fastest price gains in four decades.

The IEA said earlier this week Russia’s oil output could slump by about a quarter next month, inflicting the biggest supply shock in decades as buyers shun the nation’s exports. On Friday, the agency said advanced economies could curb their oil demand by reducing speed limits and using public transport to ease potential strains on the market.

Russian crude is still being treated with extreme caution by buyers worried about damage to their reputation or falling foul of sanctions. Since the invasion of Ukraine, the lion’s share of oil refining companies across Europe have said they will scale back purchases from Moscow.

One of the most volatile corners of the oil market has been diesel, partly because Russia is a major exporter to the rest of Europe. Open interest -- the number of contracts outstanding in Europe’s main diesel contract -- has fallen by more than half from its high last year, as traders take fright at the volatility.