Surprises for gold, oil, nuclear and lithium in 2022: Blackstone

Oil rose for a third straight week as demand remained resilient, while supplies are frayed across the OPEC+ coalition and beyond.

West Texas Intermediate crude in New York climbed 5 per cent this week, despite closing down 0.7 per cent on Friday. Kazakhstan’s biggest oil producer has altered output at the giant Tengiz field following protests, while Libyan production has also been crimped. However, restrictions on access to restaurants and gyms from Germany to Hong Kong were a reminder that the omicron variant could still curb demand.

“The oil market remains very tight and seems like it will go higher,” said Ed Moya, Oanda’s senior market analyst for the Americas. “But energy traders are concerned curbs across Europe and Asia could threaten the short-term demand outlook.” 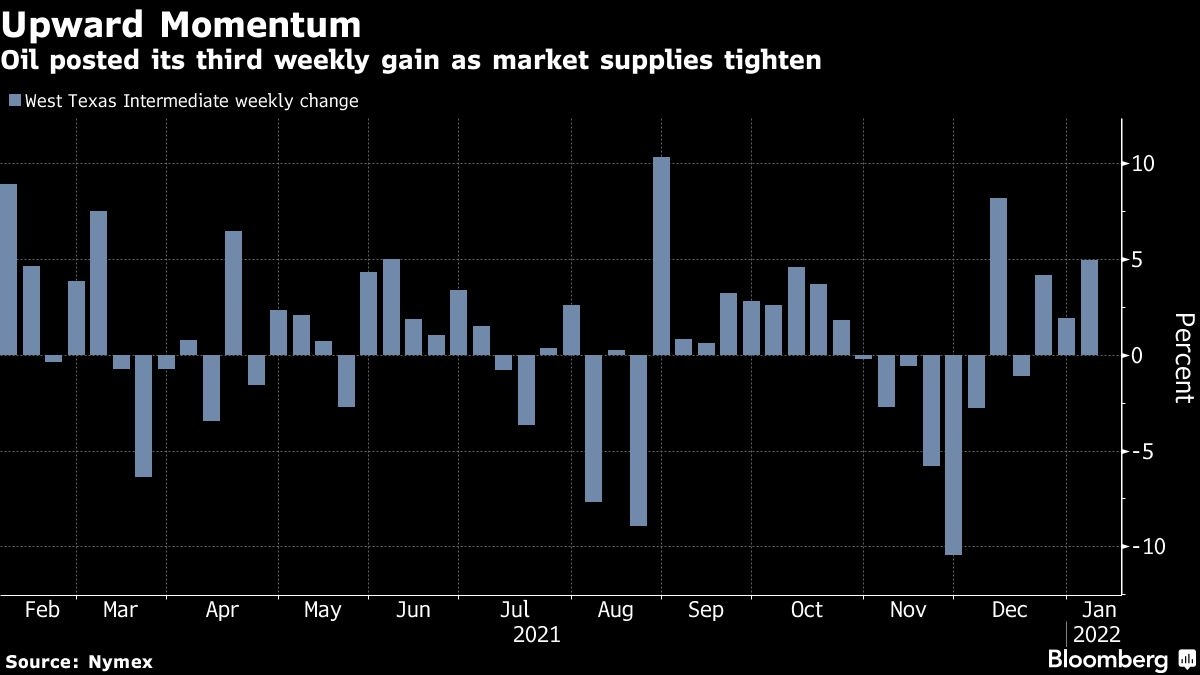 This week, OPEC+ announced its plan to stick with a scheduled output boost of 400,000 barrels a day for February. However, the group is unlikely to meet the threshold as some members have struggled to achieve their targets in previous months. Production in Libya has declined amid militia unrest, while Russia also failed to boost volumes last month. Nigeria, beset by disruptions at loading facilities, pumped just 1.35 million barrels a day of crude last month.

“The recent oil-price rally has clearly been supported by the supply side, with production issues in Nigeria, a deep-freeze disrupting oil flows in Canada and northern U.S., and disappointing production numbers from Brazil, Russia and OPEC” said Helge Andre Martinsen, senior oil analyst at DNB Bank ASA in Oslo.

The operator of Kazakhstan’s Tengiz field, known as TCO, declined to provide further details on the size of the output adjustment, but it said that production operations were continuing. TCO is a joint venture led by Chevron Corp. that pumps about a third of the nation’s oil.

A deep freeze in Canada and the northern U.S. has also disrupted oil flows this week. That’s coincided with shrinking American crude inventories, which have declined every week since November.