Oil fell this week as prospects for a global economic slowdown weighed heavily on the demand outlook.

West Texas Intermediate futures dropped 6.7 per cent for the week amid tightening monetary policy and renewed anti-virus lockdowns in China. Meanwhile, traders shrugged off an announcement by G-7 leaders of plans to cap the price of Russian crude in retaliation for Vladimir Putin’s aggression in Ukraine.

The G-7 move is largely symbolic “as the Russians are proving capable of circumventing restrictions already imposed by the G-7 countries, and hitting a record high export volume in August despite sanctions,” analysts at wholesale-fuel distributor TACenergy wrote in a note to clients.

On Friday, prices briefly rebounded after the US State Department said the Iran’s latest response to nuclear-deal proposals was “not constructive.” The talks are being closely watched by oil traders because any deal to relax sanctions could allow more Iranian crude to flow into markets. 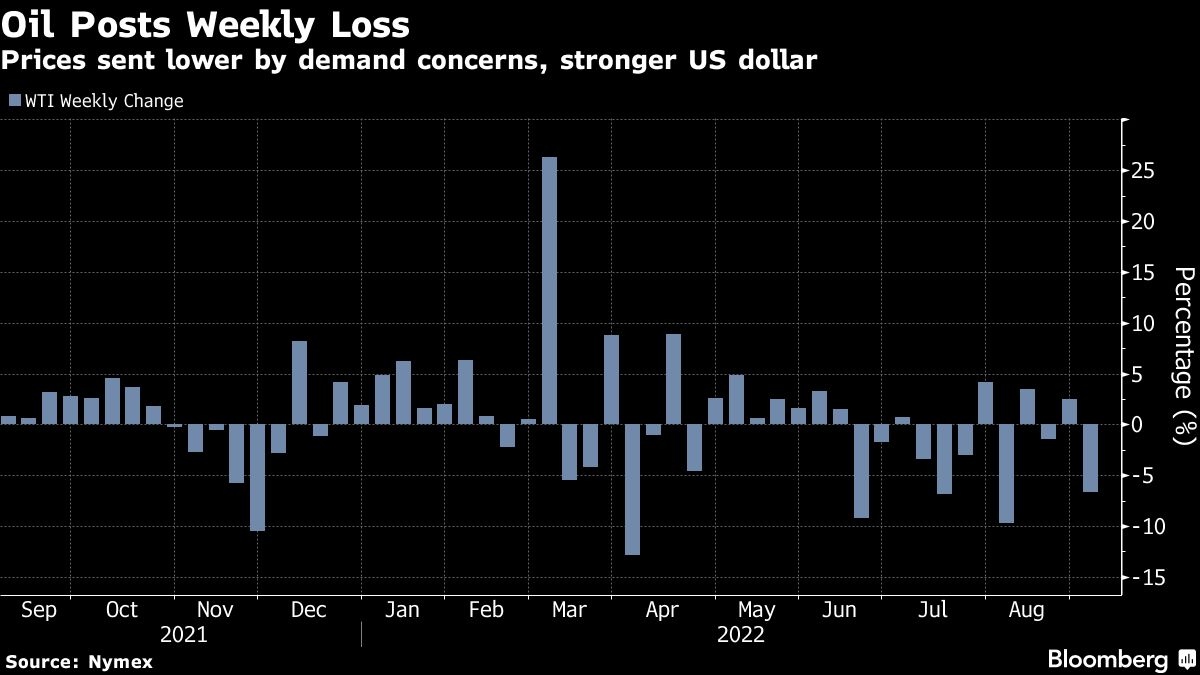 Oil fell by more than 20 per cent in the three months through August, erasing all of the gains since Russia’s late-February invasion of Ukraine.

The price retreat poses a challenge for the Organization of Petroleum Exporting Countries and its allies, with ministers due to meet Monday to plan output policy. While OPEC-watchers expect the group to keep supplies steady, Saudi Arabian Energy Minister Prince Abdulaziz bin Salman raised the possibility of a production cut in remarks last week.

Widely-watched time spreads, an indicator of market tightness, have been volatile. Brent’s prompt spread -- the difference between its nearest two contracts -- was US$1.21 a barrel in a backwardation, compared with almost US$2 a barrel at the end of last week and 63 cents two weeks ago.