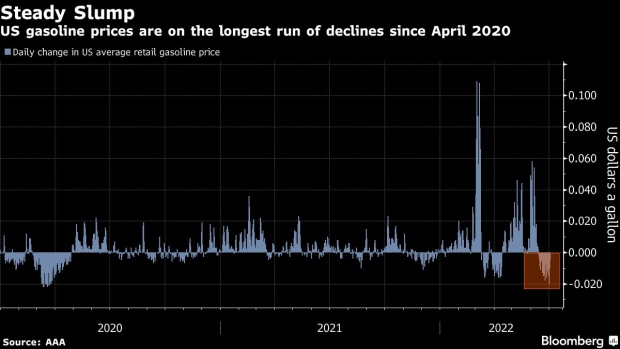 (Bloomberg) -- It’s been a tailwind for oil prices for most of this year, but the previously booming US gasoline market is showing a few signs of cooling off.

Retail prices have now fallen for 21 consecutive days, the longest losing streak since April 2020. The relief at the pump is welcome news for many in the US who rely on cars for work and leisure, and to President Joe Biden as he tries to lower fuel costs. Meanwhile in the futures market, money managers are holding the fewest bullish bets relative to bearish ones since November.

They are twin forces that, for now at least, support the notion that the biggest US fuel market has at least stopped overheating. Excluding when demand collapsed in 2020 due to Covid-19, consumption of the road fuel last week was the lowest for the time of year since 2014, according to EIA data.

High prices for the fuel have given refineries an incentive to buy crude, thereby supporting oil prices. The spread between gasoline and West Texas Intermediate crude remains at an extraordinarily level of about $45 a barrel -- but even that has ebbed slightly from a peak near $61 last month.

Stockpiles of the fuel have expanded by more than 4 million barrels over the past two weeks. They normally decrease at this time of year.

The tentative signs of a cool-down follow a period in which pump gasoline prices briefly topped a record $5 a gallon. Even after the latest slide, they remained at $4.80 a gallon -- an incredibly high level at any other time in history, American Automobile Association data released on Tuesday show.

It’s unclear how much longer Biden’s relief will last.

Gasoline is still far higher than a year earlier and a record number of drivers were expected to hit the roads for the July 4 weekend, the AAA said last week.