Oil surged the most in more than a decade after a devastating attack on Saudi Arabia intensified concerns about growing instability in the world’s most important crude-producing region.

In an extraordinary start to the week’s trading, Brent futures in London leaped a record US$12 a barrel in early trading Monday before settling just above US$69 for the biggest one-day gain since 2008. Prices may remain elevated after Saudi officials downplayed prospects for a rapid recovery of production capacity.

Saudi Aramco faces weeks or months before most output from its giant Abqaiq crude-processing complex is restored, according to people familiar with matter. Saudi Arabia’s Foreign Ministry said Iranian weapons were used in the attacks on Saudi Aramco, while the U.S. blamed Iran for the attacks.

For oil markets, it’s the worst sudden supply disruption ever. The attacks that damaged a key processing complex and one of the Saudi’s marquee fields highlight the vulnerability of the world’s biggest exporter. The crisis also means a “new geopolitical premium” of about US$5 a barrel, Mizuho Securities USA’s Paul Sankey wrote in a note.

“We have never seen a supply disruption and price response like this in the oil market,” said Saul Kavonic, an energy analyst at Credit Suisse Group AG. “Political-risk premiums are now back on the oil-market agenda.”

Meanwhile, U.S. Energy Secretary Rick Perry told CNBC that a “coalition effort” will be needed to counter Iran, which the Trump administration said was behind the attacks.

State-run producer Saudi Aramco lost about 5.7 million barrels a day of output on Saturday after 10 unmanned aerial vehicles struck the Abqaiq facility and the kingdom’s second-largest oil field in Khurais. A Saudi military official earlier said preliminary findings showed that Iranian weapons were used in the attacks but stopped short from directly blaming the Islamic Republic for the strikes.

The disruption surpasses the loss of Kuwaiti and Iraqi petroleum output in August 1990, when Saddam Hussein invaded his neighbor. It also exceeds the loss of Iranian oil production in 1979 during the Islamic Revolution, according to the International Energy Agency.

“The vulnerability of Saudi infrastructure to attacks, historically seen as a stable source of crude to the market, is a new paradigm the market will need to deal with,” said Virendra Chauhan, a Singapore-based analyst at industry consultant Energy Aspects Ltd. “At present, it is not known how long crude will be offline for.” 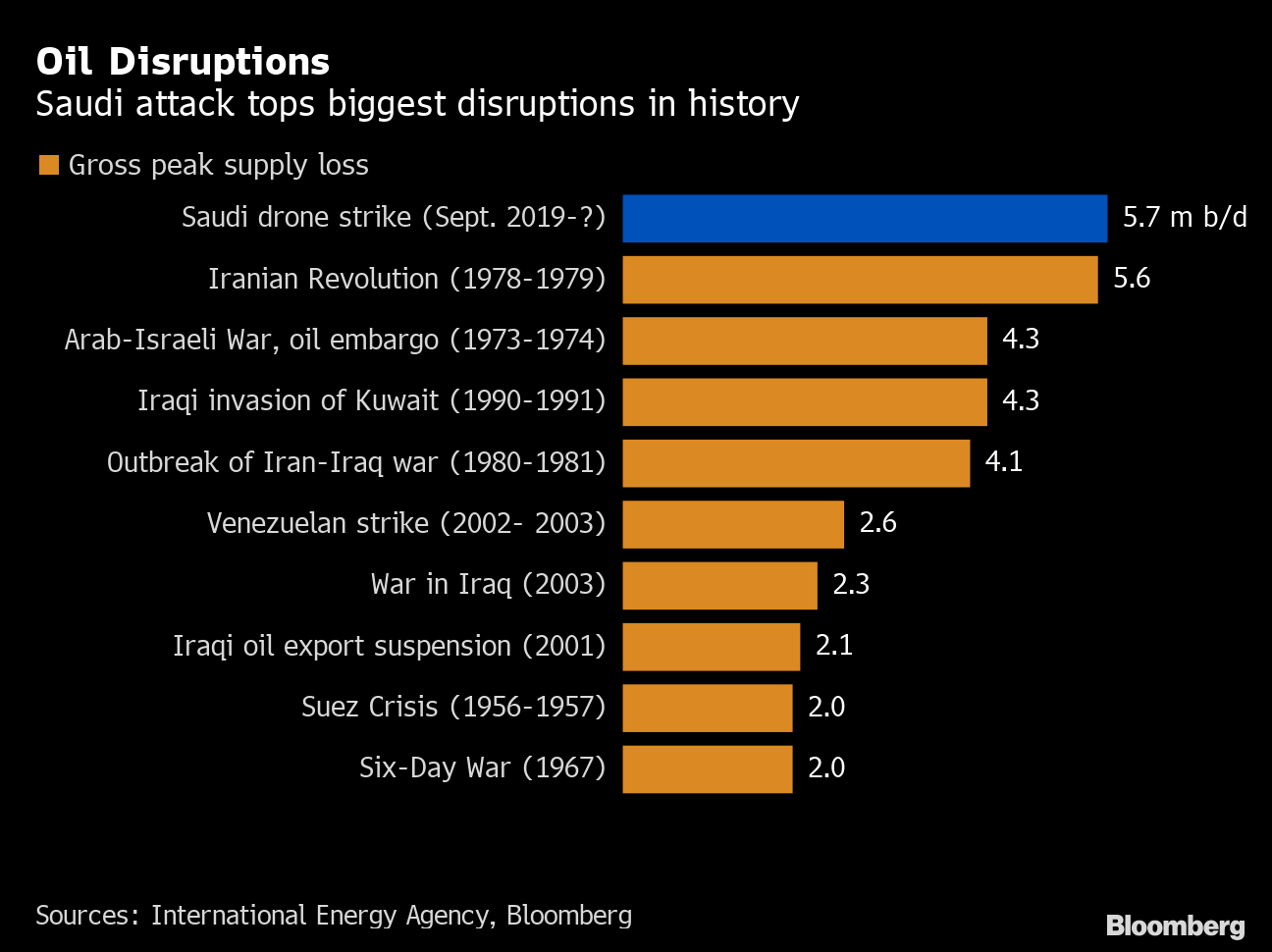 Aramco officials are growing less optimistic that there will be a rapid recovery in production, a person with knowledge of the matter said. The kingdom -- or its customers -- may use stockpiles to keep supplies flowing in the short term. Aramco could consider declaring itself unable to fulfill contracts on some international shipments -- known as force majeure -- if the resumption of full capacity at Abqaiq takes weeks. Alternatively, the kingdom’s own refineries may cut runs just to keep crude exports flowing, according to analysts with JBC and Energy Aspects.

Declaring force majeure would rattle oil markets further and cast a shadow on Aramco’s preparations for what could be the world’s biggest initial public offering. It’s also set to escalate a showdown pitting Saudi Arabia and the U.S. against Iran, which backs proxy groups in Yemen, Syria and Lebanon. Iran-backed Houthi rebels in Yemen claimed credit for the attack, but U.S. President Donald Trump and Secretary of State Mike Pompeo have already blamed Iran.

Trump, who said the U.S. is “locked and loaded depending on verification” that Iran staged the attack, earlier authorized the release of oil from the nation’s emergency reserves. The IEA, which helps coordinate industrialized countries’ emergency fuel stockpiles, said it was monitoring the situation.

Saudi Arabia oil supply was attacked. There is reason to believe that we know the culprit, are locked and loaded depending on verification, but are waiting to hear from the Kingdom as to who they believe was the cause of this attack, and under what terms we would proceed!

....sufficient to keep the markets well-supplied. I have also informed all appropriate agencies to expedite approvals of the oil pipelines currently in the permitting process in Texas and various other States.

Brent for November settlement rose 15 per cent to US$69.02 on ICE Futures Europe. The global benchmark could rise above US$75 a barrel if the outage at Abqaiq lasts more than six weeks, Goldman Sachs Group Inc. said.

On the New York Mercantile Exchange, West Texas Intermediate futures for October delivery settled up 15 per cent at US$62.90, the highest close since May 21. Brent’s premium to WTI for the same month closed at US$6.35 a barrel.

The drama wasn’t limited to flat prices. The spread between Brent and WTI widened as much as 37 per cent, showing that the oil spike will affect global prices more than those in the U.S., where shale output and ample supplies provide more of a buffer. 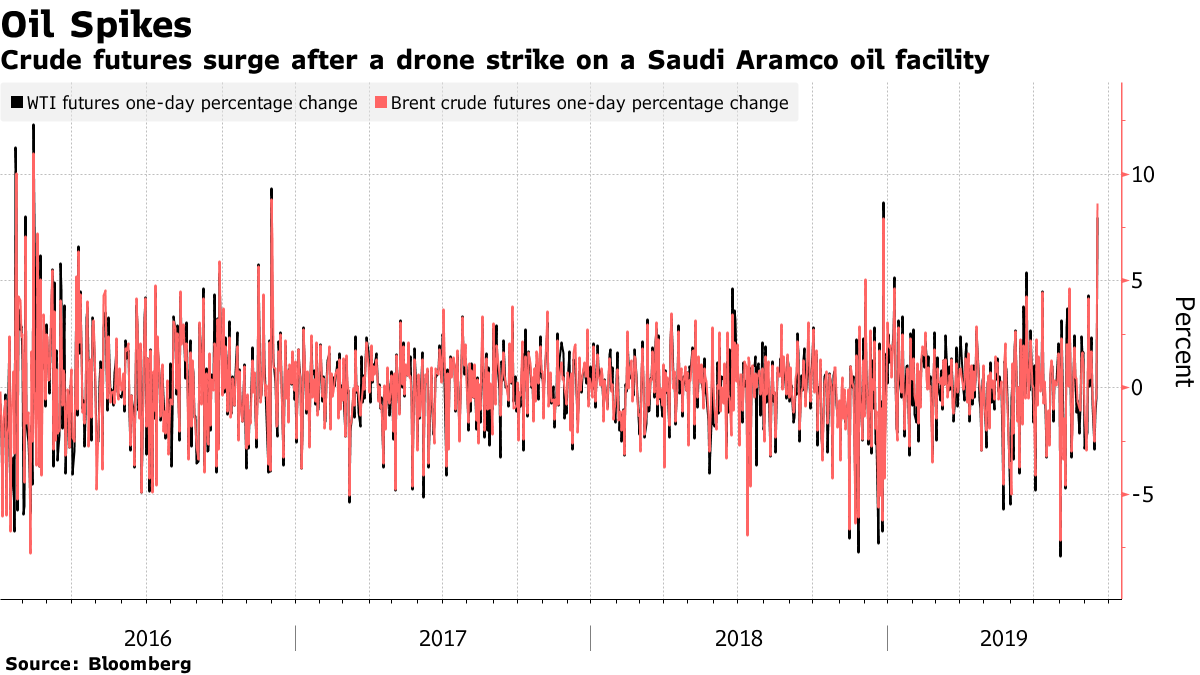