We're sitting at the bottom of the global energy cycle: Money manager on weak WCS price

The sun will come out tomorrow, or at least some time next year.

That’s the message from Canadian oil producers suffering from the worst domestic glut in at least a decade. Even as prices dipped to new lows on Thursday, some companies including Suncor Energy Inc. and Canadian Natural Resources Ltd. see reasons for optimism. Enbridge Inc.’s Line 3 pipeline is scheduled to be expanded and more oil is moving by rail. But for now, some producers are choosing to cut output rather than sell at current regional prices.

“Demand for these products is coming up,” Steven Williams, Suncor chief executive officer, said in a conference call Thursday. “Rail movements are starting to ratchet up, and of course, we had good news this last week about Line 3 progressing.”

Canadian crude prices collapsed last month as a surge of new oil sands production and output from the shale formations of the Montney and Duvernay encountered pipeline bottlenecks and reduced U.S. demand amid refinery maintenance.

Heavy Western Canada Select fell to a discount of more than $50 a barrel to West Texas Intermediate futures last month, the biggest in at least a decade. Light Edmonton Mixed Sweet reached its widest in Bloomberg data back to 2014 Thursday, while light synthetic crude fell to its widest since 2006. 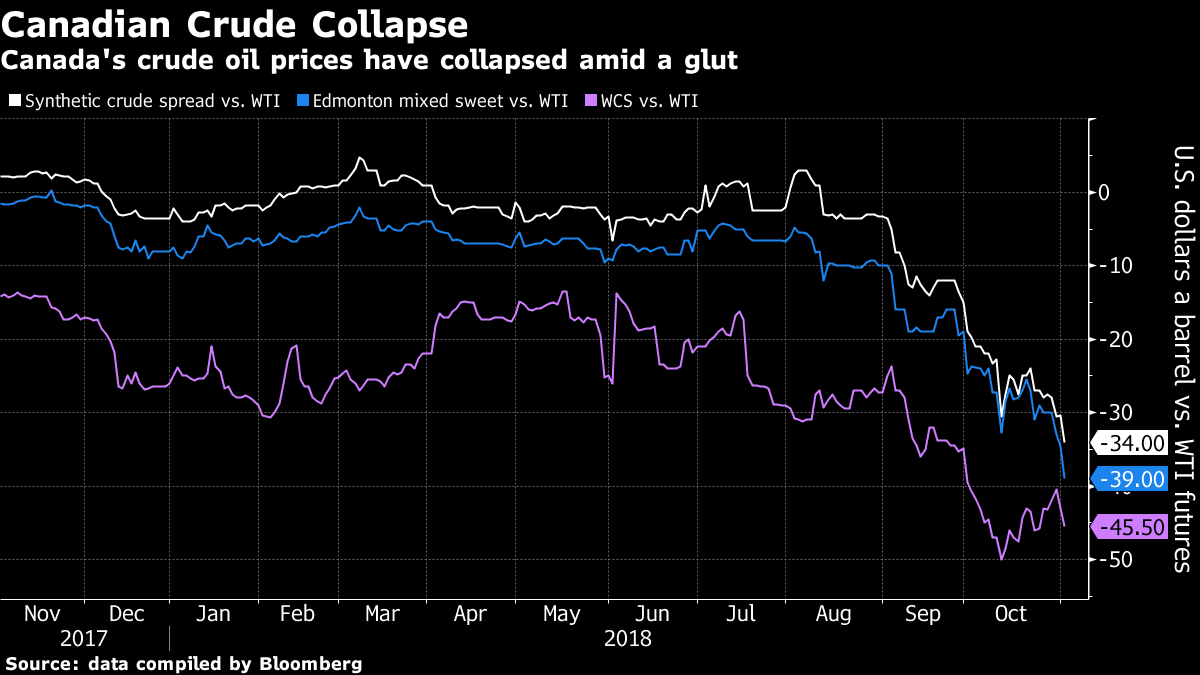 “We are assuming that high differentials continue certainly the rest of this year, all of next year, all of the year after that,” Peabody said in an Oct. 25 conference call. “And then, we start seeing some structural relief from some of these pipelines if they come on according to the kind of current schedule.”

Amid the glut, Canadian Natural said Thursday it would shut as much as 55,000 barrels a day of mostly heavy oil output in November and December after smaller cuts in October. Cenovus Energy Inc. is running its Foster Creek and Christina Lake projects at reduced rates and has stored some production in salt caverns, the company said Wednesday.

Hope on the horizon

Some relief is on the horizon. Most immediately, U.S. refineries that take Canadian crude, such as BP Plc’s Whiting plant in Indiana, are scheduled to return from maintenance this month, boosting crude demand.

“As those refineries come back up, that should allow you to start drawing down inventories,” Randy Ollenberger, an analyst with BMO Capital Markets, said in an interview. “The differential I think should improve for sure in December from this $45 level.”

Longer term, Canada needs to break the logjam of limited export pipeline capacity. Crude shipments by rail are picking up with Cenovus signing multi-year agreements to ship 100,000 barrels a day and Canadian Natural agreeing to ship 10,000 barrels a day. Enbridge’s 370,000 barrel-a-day Line 3 pipeline expansion is scheduled to start operating by the fourth quarter of next year.

Line 3 should contribute to some “significant easing” of the differentials by the middle of next year, Alex Pourbaix, Cenovus CEO, said on a conference call Wednesday.

“It’s our view the market anomaly is most likely a nine to 12 month” event, Laut said.