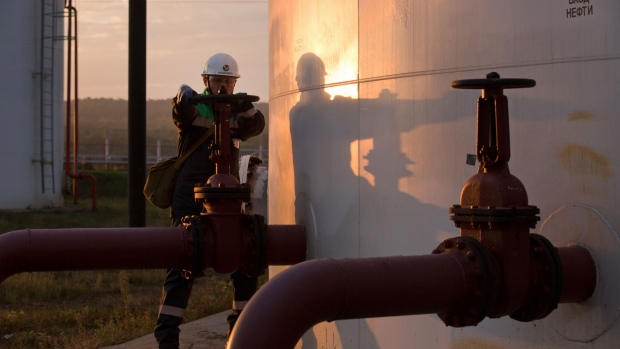 An employee turns a control valve on pipework beside a storage tank at an oil delivery point operated by Bashneft PAO in Sergeevka village, near Ufa, Russia, on Monday, Sept. 26, 2016. , Bloomberg

News that a deal was finalized by OPEC and other oil producing nations to cut production by nearly 10 million barrels per day is being welcomed in Canada, where provinces have suffered drastic revenue losses due to rock-bottom crude prices.

"This is good. We welcome any news that brings stability to global oil markets," Natural Resources Minister Seamus O'Regan said in an emailed statement Sunday.

The agreement between the cartel, Russia and other countries came late last week and followed a supply battle that began last month when Russia refused to cut its output amid plunging demand due to the COVID-19 pandemic, prompting Saudi Arabia to increase its oil production and reduce its price.

Alberta Premier Jason Kenney, who commented Saturday on the negotiations and the hope for their success, noted his province had not been asked to constrain production.

"We've been very clear in conveying to OPEC, the United States and others around the world that Alberta has already been in curtailment of production for the past 15 months and that we cannot really affect global prices because we do not have global market access. We don't have those pipelines to the coast," Kenney told reporters during a teleconference on Alberta's pandemic response.

"Even if we wanted to surge production, we would be capped out at about four million barrels per day that we could ship through existing pipelines plus crude by rail," he added.

The deal that was finalized Sunday reportedly allows Mexico to cut only 100,000 barrels a month, which had been a sticking point after the talks last week.

Mexico's energy minister tweeted that the group of nations agreed to cut 9.7 million barrels a day to begin May 1, and energy officials from other countries shared similar information Sunday.

O'Regan, who participated in a conference call Friday with G20 energy ministers, had refused to speculate on whether Canada might consider curtailing its production as part of the broader multilateral effort, but said it's no secret that production has dropped in Newfoundland, Alberta and Saskatchewan.

Prime Minister Justin Trudeau also wouldn't say Friday whether Canada would take measures to reduce its output, although he noted that Alberta has already curtailed production and that Canada would "continue to look to make sure that other countries are doing their part."

"The federal government is deeply concerned about oil price instability and the impact on thousands of workers in Canada's energy sector, and their families," the email stated.

Kenney on Saturday chastised the "reckless actions of the Saudis and Russians" which he said flooded global inventories to the point that extremely low prices would continue for at least 18 months.

"There's just no sugar-coating that," he said, adding he awaits news of federal plan to help the energy industry.

O'Regan said last week that the long-awaited bailout would contain measures to improve "liquidity" for Canada's energy sector and is coming soon, but he didn't say when.