Oil climbed the most in over a week during a volatile summer session as investors continue to weigh US-Iran nuclear deal talks and the potential hit to demand from an economic slowdown.

West Texas Intermediate futures topped US$90 a barrel on Monday amid a return of bullish sentiment after a recent oil rout. Uncertainty around Iranian supply aided crude’s drift higher in a market where shortages have been exacerbated by sanctions on Russian energy. A draft text to revive the 2015 nuclear deal has been tabled by the European Union, and the US and Iran have have a matter of weeks to now decide whether to accept it, European officials with knowledge of the negotiations said on Monday.

The talks around a possible return of Iranian supply continues to unnerve the market, said Rebecca Babin, a senior energy trader at CIBC Private Wealth Management. At the same time, “trading volume remains pretty tepid and it does not take much to move the market at the moment,” she added. 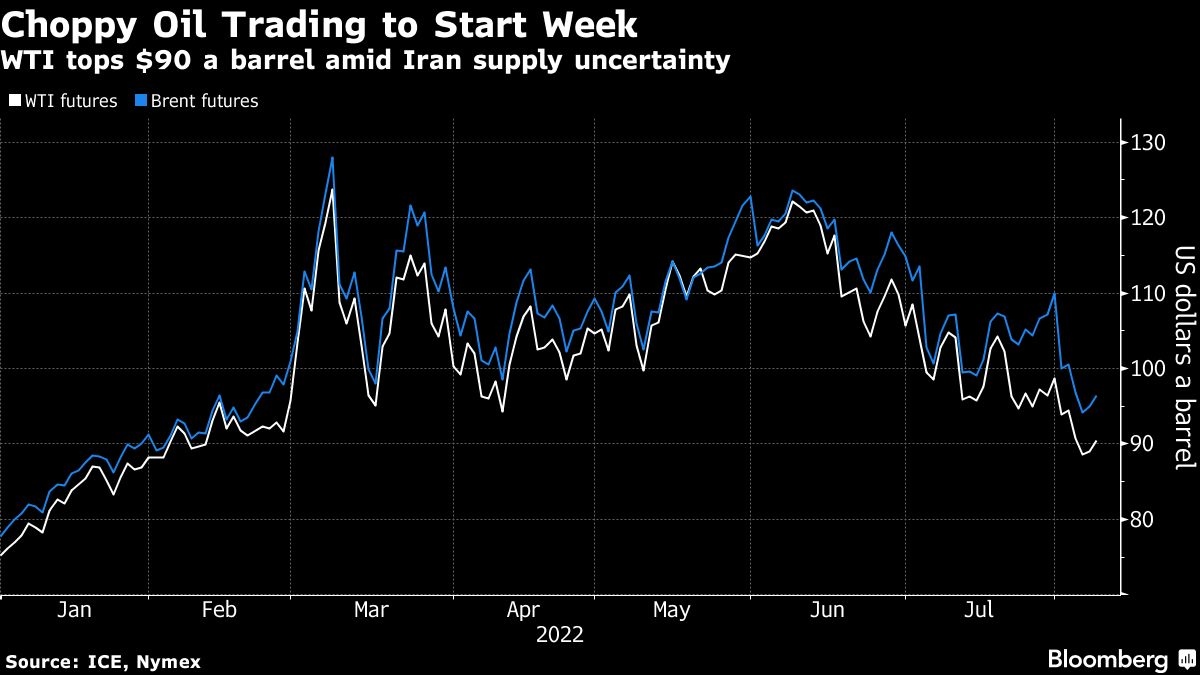 Data released over the weekend showed China’s imports of crude rose in July from the lowest in four years as travel and transportation activity improved after COVID-19 curbs eased. Still, the country’s year-to-date total remains about 4 per cent  lower.

Meanwhile, one of the market’s most bullish voices, Goldman Sachs Group Inc., cut its near-term price forecasts. The bank previously expected US$140 for Brent in the third quarter, but now sees US$110. It said it remains bullish, however, as stockpiles continue to decline and prices haven’t yet reached a level at which demand is being destroyed.

Oil is “down, but not out,” Goldman analysts, including Damien Courvalin, said in an Aug. 7 note. “We continue to expect that the oil market will remain in unsustainable deficits at current prices.”

Crude has had a roller-coaster ride in 2022, soaring in the opening months of the year following Russia’s invasion of Ukraine, then sinking from June as global slowdown concerns gathered pace. Elevated inflation has prompted central banks, including the Federal Reserve, to raise interest rates, with investors wagering that more hikes remain in store this half.

The selloff in crude since June has been accompanied by a sustained retreat in gasoline prices, a bright spot for US President Joe Biden as his administration seeks to tackle inflation. Average nationwide retail gasoline prices in the US have dropped for 55 straight days to slightly more than US$4 a gallon, according to auto club AAA. They peaked at a record above US$5 in June.

With oil prices just above a six-month low, investors are in line for a deluge of market commentary this week. The US Energy Information Administration is set to issue its short-term outlook Tuesday, followed by monthly snapshots from producer group OPEC and the International Energy Agency Thursday.