A Russian invasion of Ukraine could get us to $100 oil: RBC's Helima Croft

Oil posted a fourth straight weekly gain, the longest winning streak since October, on signs that the market is tightening as global consumption withstands the impact of the omicron virus variant.

West Texas Intermediate futures in New York closed up 2.1 per cent on Friday, posting a 6.2 per cent weekly increase. Oil has made a strong start to the year, underscored by depleting U.S. inventories and product demand at multiyear highs.

“The picture for oil is getting better because people are looking past the omicron variant and looking to reopening and a rebound in activity, much like we saw coming out of August,” said Rob Haworth, senior investment strategist at U.S. Bank Wealth Management. 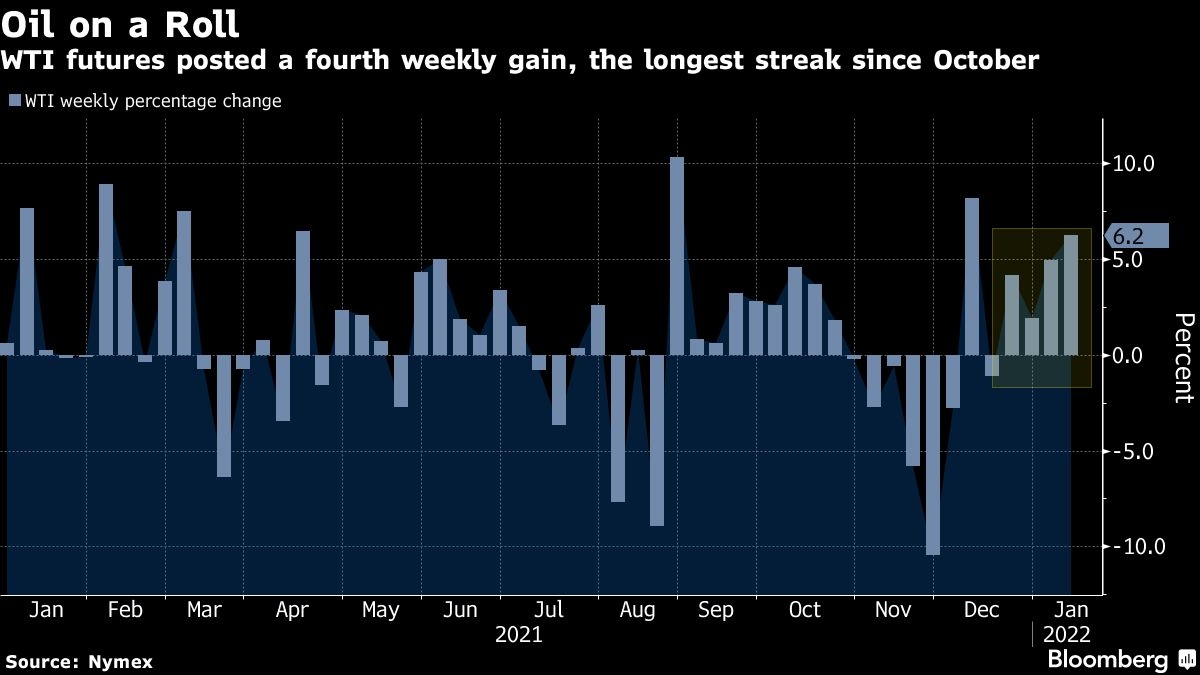 Crude has clawed back most of its losses late last year that were driven by omicron and the White House-led releases from national oil reserves. Although it has proved to be fast-spreading, the variant also appears to be milder, particularly in vaccinated people, lessening the impact on energy consumption. Demand in India is poised to weather the latest scare, according to Hindustan Petroleum Chairman Mukesh Kumar Surana. The International Energy Agency said earlier this week that global oil demand has turned out to be stronger than expected.

Oil prices are also finding support from physical markets -- where real barrels are bought and sold -- as supplies change hands at healthy premiums. There’s also global strength in the diesel sector. With prices climbing higher, traders are watching whether the Organization of Petroleum Exporting Countries and its allies will be able to deliver their planned monthly production increases in output in full.

Optimism about the demand outlook is reflected in the market’s bullish backwardated pricing structure, with near-term futures above those further out. The spread between West Texas Intermediate’s two nearest December contracts is now well above US$6 a barrel, up from less than US$3 in early December.

Despite the broadly positive mood, there are notes of caution. China has maintained its strict approach to the virus, while India and some other Asian countries have introduced partial curbs which has caused a drop in mobility. On Monday, China is likely to confirm its weakest economic growth in more than a year, after reporting a drop in annual crude imports on Friday.