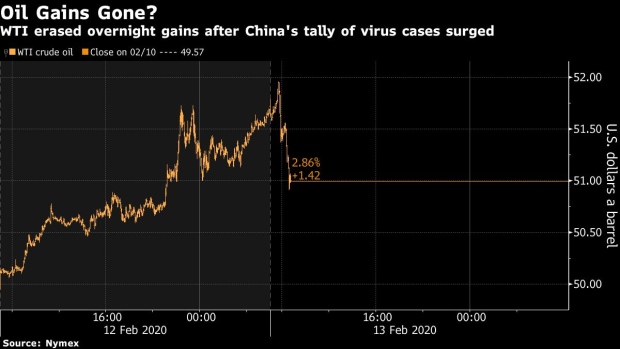 An oil pumping jack, also known as a 'nodding donkey,' operates in an oil field near Samara, Russia, on Tuesday, May 14, 2019. The nearby village of Nikolayevka in central Russia has emerged as the epicenter of an international oil scandal with authorities saying corrosive chlorides entered Russia’s 40,000-mile network of oil pipelines, causing the first-ever shutdown of the main export artery to Europe. Photographer: Andrey Rudakov/Bloomberg , Bloomberg

(Bloomberg) -- A nascent rebound in oil prices ran out of steam after China’s Hubei province reported almost 15,000 new coronavirus cases as it changed its method for counting infections.

The government of the province at the heart of the outbreak said it had carried out a review of past suspected cases and revised its data to include “clinically diagnosed” cases in its daily disclosure. The announcement spurred a drop in crude, which had risen almost 5% since Monday’s close on optimism that the virus was easing and the global economy would be spared a major slowdown.

The revised virus count may put more pressure on Russia to support an OPEC+ plan for additional output cuts to try and balance the market as demand craters due to the outbreak. In another sign of weakening consumption, the U.S. reported the biggest weekly jump in crude stockpiles in three months.

Brent for April settlement added 0.3% to $55.97 a barrel on the ICE Futures Europe exchange in London on Wednesday after surging 3.3% in the previous session. The global benchmark crude traded at a $4.34 premium to the WTI for the same month.

To contact the reporter on this story: Elizabeth Low in Singapore at elow39@bloomberg.net