OPEC is keeping this market in a deficit which supports a higher price: TD's Bart Melek

Oil climbed to the highest since the middle of March as reopening efforts and vaccination pushes from the U.S. to Europe underpin hopes for a return to normal demand in the world’s largest economies.

Futures in New York gained 1.9 per cent on Tuesday, the biggest daily jump in nearly three weeks, while gasoline futures settled at the highest since July 2018. The U.S. is setting a new target of 70 per cent of U.S. adults receiving at least one COVID-19 vaccine shot by July 4, while British Prime Minister Boris Johnson said his country’s lockdown rules are set to be scrapped in seven weeks. That’s offsetting concerns about weaker oil consumption in parts of Asia, including key importer India, where COVID-19 remains rampant.

“Gasoline inventories in the U.S. are well below where they were a year ago and we’ve taken out refinery capacity,” said Peter McNally, global head for industrials, materials and energy at Third Bridge. “We’ve seen the impact on demand as more people get vaccinated, so we’re going to get that tailwind plus seasonality coming later this month.” 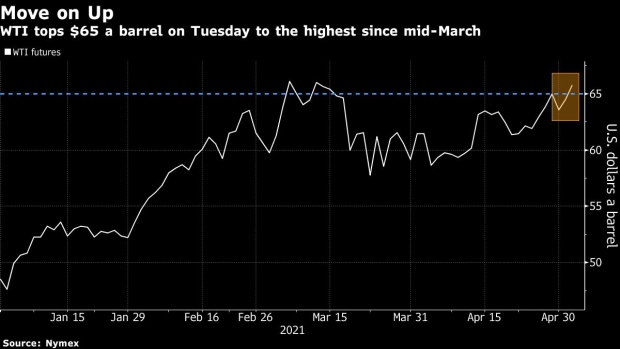 U.S. crude futures are up more than 35 per cent this year -- amid a broad advance across commodity markets -- as investors bet that the rollout of vaccines will permit a return to pre-pandemic conditions. The European Union plans to ease curbs for vaccinated travelers this summer, while in the U.S., New York plans to lift most of it virus restrictions this month. More broadly, the world’s 20 major economies are set to back efforts to introduce so-called vaccine passports to boost the beleaguered travel and tourism industry.

“The news from Europe on the outlook toward reopening is providing a good sense of optimism for global demand continuing to rise,” said Gary Cunningham, director at Stamford, Connecticut-based Tradition Energy.

Crude’s gains on Tuesday were outpaced by those in petroleum products, most notably gasoline. In the U.S., spread between gasoline and crude futures hit the highest since April of last year in intraday trading. That comes as green shoots of a return to normal demand in the world’s largest oil-consuming country continue to emerge. CVR Energy Inc.’s Oklahoma and Kansas refineries are running all out amid a significant increase in gasoline demand since March, Chief Executive Officer David L. Lamp said during a conference call with investors.

At the same time, cash-market gasoline in New York Harbor rose to a six-week high following the shutdown of a key fuel-making unit at Phillips 66’s Bayway refinery in New Jersey. The refinery’s sole fluid catalytic cracker -- one of the largest in the world -- is expected to be down at least several days for repairs.

OPEC kept its crude production steady in April, ahead of a planned output hike this month. Production fell by 50,000 barrels day, with a setback in Libya largely offset by further gains for Iran. Underscoring plans from producer nations to bring barrels back into the global market, total global flows of seaborne oil from many of the world’s largest exporters rose in April.

In the U.S., crude stockpiles are expected to have fallen last week, according to a Bloomberg survey, which would be the first decline in inventories in three weeks if confirmed by U.S. government data on Wednesday. The industry-funded American Petroleum Institute releases its storage tally later Tuesday.