The markets look at the invasion of Ukraine as a potential supply disruption: Andrew Lipow

Oil prices rallied Tuesday after the biggest one-day tumble this year, with traders refocusing on the outlook for strong demand and the risk that a Russia-Ukraine conflict could disrupt supplies.

West Texas Intermediate futures settled above US$85 a barrel as fears about fresh lockdowns and a hit to global demand due to the omicron variant eased. Prices have whipsawed as the U.S. Federal Reserve prepares for interest-rate increases, hammering equity markets, while Russia builds troops along the border with Ukraine, prompting supply jitters in Europe.

“Crude prices are soaring on expectations that an already tight oil market could see geopolitical risks exacerbate the current imbalance,” said Ed Moya, Oanda’s senior market analyst for the Americas. “The risks are not just with the Russia-Ukraine border, but also include Iran nuclear talks and also North Korea.”

WTI pared gains after the market closed following the U.S. announcement that it’s loaning 13.4 million barrels of oil to mulitple firmst in an effort by the Biden Administration to calm the sharp rally in crude prices. 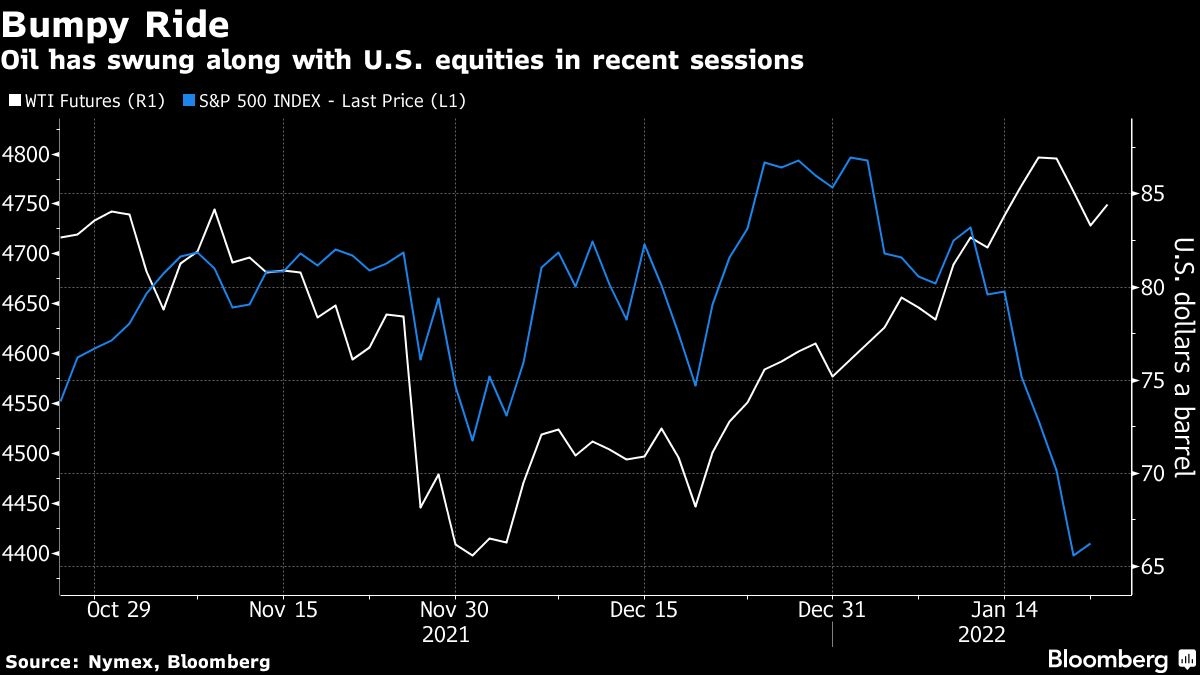 In recent months, oil bears have retreated with speculators turning more bullish amid lower stockpiles. Crude rallied to a seven-year high last week as global consumption remained strong in the face of the fast-spreading, but milder, omicron variant. While inventories usually grow early in the year, traders are fretting that by the Northern Hemisphere’s summer, when demand typically rises, stockpiles may be too low to prevent a jump in prices.

“Markets have proved to be tighter than we thought,” said David Martin, head of commodity desk strategy at BNP Paribas. He see small reductions in inventories this quarter, “and that underpins this view that the market continues to tighten up.”

Inventories in key regions have tightened with stockpiles at Cushing, Oklahoma, the delivery point for benchmark U.S. crude futures, sliding to the lowest levels in more than five years seasonally.

The market is also skeptical the Biden administration can do anything to slow down oil’s move higher as OPEC+ seems set to stick to gradual production increases, Moya said.

The U.S. is putting thousands of soldiers on alert for deployment to Eastern Europe. The risk of a Russian invasion of Ukraine in the next few weeks stands at more than 50 per cent, according to RBC Capital Markets analyst Helima Croft. Disruption to oil flows from Russia could easily send prices to US$120 a barrel, JPMorgan Chase & Co. wrote last week.

Costlier oil is helping fan inflationary pressures worldwide, prompting central banks to tighten monetary policy and forcing governments to take steps to cushion the impact on consumers. On Tuesday, Japan said it will give subsidies to refiners in a bid to curb gasoline prices.

Meanwhile, the industry-funded American Petroleum Institute reported that U.S. crude inventories fell 875,000 barrels last week. This would be the smallest decline since early December, if confirmed by the U.S. government in its report Wednesday.