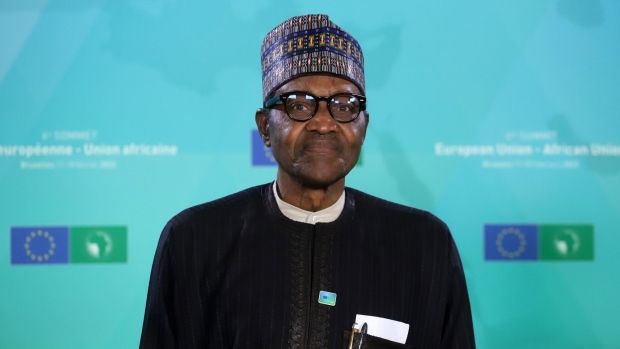 Muhammadu Buhari, Nigeria's president, at the European Union-Africa Union Summit in Brussels, Belgium, on Thursday, Feb. 17, 2022. Brussels welcomes about 40 African leaders for the first time in eight years, aiming to reset European relations with the continent as it vies with China for influence. Photographer: Valeria Mongelli/Bloomberg , Bloomberg

Hours after Buhari’s office approved Seplat Energy Plc’s acquisition of Exxon’s shallow-water business, the Nigerian Upstream Petroleum Regulatory Commission said the transaction is “purely a regulatory matter.” In addition, it’s previous rejection of the deal remains in place, the NUPRC said in a statement on Monday.

The uncertainty created by the conflicting statements comes at a bad time. Buhari’s administration is trying to reverse dwindling oil production that the government blames on rampant crude theftm and attract major investment into the sector that generates more than 90% of export earnings.

“It’s not a good look for Nigeria when you’ve got this very public contradiction and in the meantime the two sides of this deal are still unsure as to what’s happening,” Gail Anderson, research director at consultancy Wood Mackenzie Ltd, said by phone. “That has a knock-on effect on other deals that are waiting on the outcome here.”

Buhari, who is also Nigeria’s oil minister, had consented to the deal in an emailed statement sent by his spokesman, Femi Adesina, earlier on Monday. The president said the sale of four permits by Exxon to Seplat would bring “extensive benefits” to Nigeria’s energy industry.

NUPRC Chief Executive Officer Gbenga Komolafe said that sweeping legislation passed last year made the body “the sole regulator in dealing with such matters.” While the law states that the transfer of permits “shall be granted upon the recommendation” of the agency, it allows the minister to reject its advice.

Should the acquisition go ahead, it would give London- and Lagos-listed Seplat additional production of about 95,000 barrels of oil equivalent from the shallow-water permits that Exxon operates in a joint venture with the state-owned Nigeria National Petroleum Co. That would almost triple the company’s output.

The NNPC has been trying to block the sale and take over the permits itself. A court in the capital, Abuja, granted the state company an interim injunction on July 6 barring Exxon from selling the subsidiary that holds the assets, according to a statement published last month by Seplat.

The presidency, Seplat and the NNPC didn’t respond to requests for comment on the NUPRC’s announcement. Exxon declined to comment.

Before Komolafe released his statement, Seplat had thanked Buhari for his consent, saying the transaction would create one of the largest independent energy companies on the London and Nigerian stock exchanges.

Seplat said Buhari granted his consent under legislation adopted in 1969, which provides the minister with a greater level of discretionary power, rather than the reforms passed last year.

The lasting impact of the impasse on investor confidence “will depend on how long this takes to resolve,” Anderson said. “It could all be resolved tomorrow for all we know.”