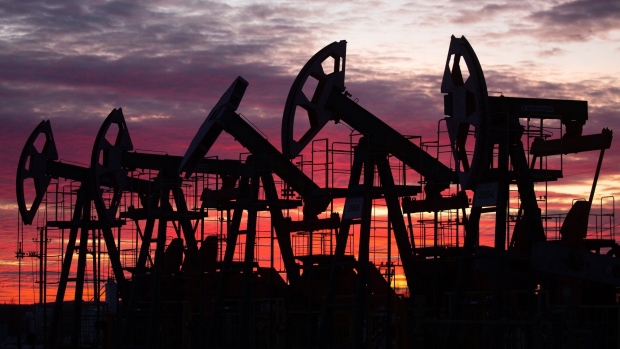 Oil pumping jacks, also known as "nodding donkeys", in an oilfield near Neftekamsk, in the Republic of Bashkortostan, Russia, on Thursday, Nov. 19, 2020. , Bloomberg

Oil plunged as the dollar pared losses ahead of a key OPEC+ meeting scheduled this week that may return more supply back to a fast-tightening market.

Futures in New York declined for a second straight session Monday, falling to the lowest in over a week. The alliance gathers on Thursday and is expected to loosen the taps after prices got off to their best ever start to a year. But it’s unclear how robustly the group will act, with the Saudi Arabian energy minister calling for producers to remain “extremely cautious.”

The market continues to face risks in the near term. China’s Unipec was re-offering cargoes of April Angolan crude amid weaker sales. Diesel demand in India was also down versus a year earlier amid record pump prices in the country. Both point to a limit on some of the recent firmness seen within the oil market.

“Now that oil’s back at US$60, there’s going to be a push to wean off of those cuts,” said Stewart Glickman, energy equity analyst at CFRA Research. “The question is how much are they going to bring back. The biggest risk is if supply presumes we’re back to pre-pandemic demand in 2021 and that turns out not to be the case.”

Still, there has been a raft of bullish calls in recent weeks predicting the rally will continue as the producer response trails consumption, while maintenance in North Sea fields is set to further reduce supply. There are also some signs that demand is starting to pick up. U.S. gasoline demand jumped by 1 million barrels a day last week to 8.76 million barrels a day, a level comparable to March 2020 before the pandemic, according to Descartes Labs.

“People have become very optimistic about the ability of OPEC+ to manage a return to a balanced market,” said Michael Lynch, president of Strategic Energy & Economic Research. The market continues to “see improved demand down the road and OPEC+ not oversupplying the market as they ramp up again.”

The Organization of Petroleum Exporting Countries and its allies must decide how much output gets restored -- and at what pace -- with current reductions amounting to just over 7 million barrels a day, or 7 per cent of global supply. The 23-nation coalition will choose whether to revive a 500,000-barrel tranche in April, and in addition, whether the Saudis confirm an extra 1 million barrels they’ve taken offline will return as scheduled.

Citigroup Inc. thinks the coalition will boost output by about 500,000 barrels a day next month, with Saudi Arabia unlikely to continue its voluntary curbs.

“A higher oil-price environment, an increasingly promising demand picture by summer, and the recovering but still growing U.S. oil production outlook for 2021 should give OPEC+ the confidence to slightly increase supply,” said Louise Dickson, an analyst at consultant Rystad Energy AS.