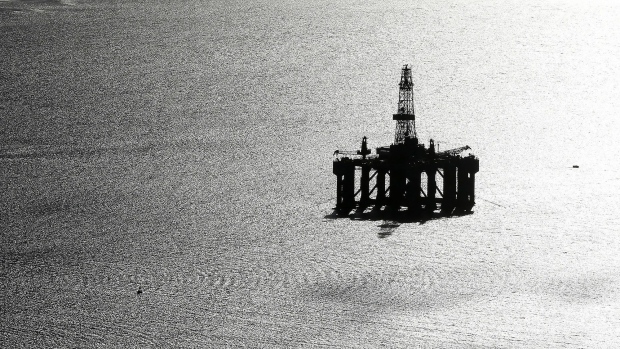 A boat passes a mobile offshore drilling unit in the Port of Cromarty Firth in Cromarty, U.K. , Photographer: Chris Ratcliffe/Bloomberg

(Bloomberg) -- Guyana, home to the world’s biggest offshore oil discovery of the last decade, is considering creating a national oil company to manage its resources, and mulling whether to exclude Exxon Mobil Corp. from bidding on new exploration areas.

The South American nation has been “swamped by interest” from oil companies after Exxon made a series of discoveries since 2015, Vice President Bharrat Jagdeo said at the BNEF Summit in New York Tuesday. It’s making plans for a new round of licensing and expects to make a decision on the process by September.

Guyana’s fortunes have been transformed by Exxon’s oil discoveries, and with its tiny population of around 800,000, it could overtake Kuwait as the largest crude producer per capita by 2025. But some in the tiny nation are concerned about Exxon’s foothold, and want more favorable terms for any future oil deals.

“There’s been a public issue about concentration,” Jagdeo said.

One option being weighed is handing exploration licenses to a state-owned oil company, which would be operated by a “strategic partner,” potentially from the Middle East, Jagdeo said. That would allow the government to play a “very passive role” in oil development, he said. Another option is to open up bidding to private oil companies through an auction. But the government could exclude Exxon and its partners Hess Corp. and China’s CNOOC Ltd. from any auction because they already control almost all the country’s oil resources.

“We are yet to determine whether we’d allow those existing operators, particularly those in that block, the Stabroek block, to bid if we go the auction route,” he said.

Either way, Exxon’s current operations wouldn’t be affected, and are expected to produce about 800,000 barrels of oil by 2025. Exxon has found 10 billion barrels of oil equivalent and owns 45% of the project, with Hess holding 30% and CNOOC 25%.

Jagdeo warned it will be a long road before the country is able to see the benefits of its oil wealth. Guyana has received only $700 million since Exxon started producing oil at the end of 2019 and not spent any of it so far. The new licenses are important because they will help correct the “inequity” of the original Exxon production sharing contract, Jagdeo said.

“There’s been a lot of call for renegotiation of the contract. We have opted not to do so,” he said. “We can correct this inequity, this imbalance in future blocks.”