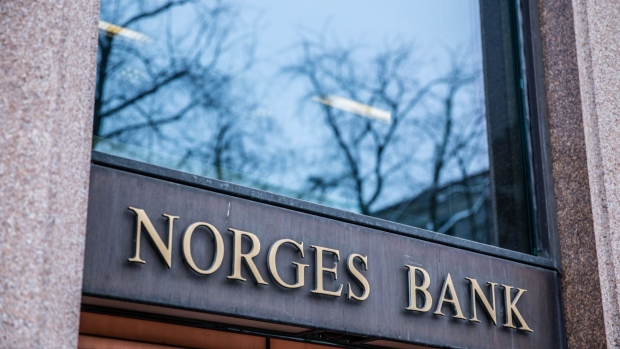 A sign sits on the window of the Norges Bank building in Oslo, Norway, on Tuesday, Feb. 5, 2019. Norway will release its latest GDP figures on Friday. , Bloomberg

Norway’s central bank issued its most comprehensive warning to date about the risks of climate change for the oil-producing country’s banks and financial markets.

Climate risk should be included in the assessment of banks’ systemic risk and ensuing additional capital requirements, Norges Bank said in its financial stability report published on Tuesday, without providing more details. While Norwegian bank’s exposure to the oil industry has dropped in recent years, it remains “important,” the central bank said.

“Climate risk, like any other risk, must be included in banks’ risk assessments,” Norges Bank Deputy Governor Jon Nicolaisen said in an interview. “That can have consequences for capital requirements.”

Norges Bank isn’t working on any specific proposals, he added.

The inclusion of climate risk in the report underscores a growing focus on the consequences of climate change for financial institutions. Banks in western Europe’s biggest oil and gas producer run a series of risks related to their exposure to the industry and may have limited possibilities to diversify, the central bank said.

“It’s something that is widely discussed and that the industry is concerned with,” Nicolaisen said.

The recent downturn in the oil industry due to the collapse in crude prices in 2014 -- which hurt Norway more than the financial crisis a decade ago -- provided clues to the dangers that may lie ahead, Norges Bank said. But climate change represents a higher risk because of its structural nature, it said.

“In a structural downturn, investors are less likely to inject fresh capital,” Norges Bank said in the report. “The result may be lower collateral values, higher probability of default rates and thereby higher bank losses.”

Banks’ losses within oil and gas production jumped to 6.8% of their industry portfolios in 2016 from 0.2 per cent in the two preceding years, Norges Bank said in the report.

Even if a significant decline in oil demand due to climate change is many years ahead, expectations can create a shift today, the bank warned. Prices may be pushed down if oil-producing countries decide to increase output to limit their exposure to falling demand down the line, making it harder for oil-related companies in Norway to service their debt.

Banks with high transition risk may also face funding difficulties, which could limit their ability to lend money to companies and households. A decline in oil-related activities can also have spillover effects to other parts of the economy, leading to higher losses for the banks.

“Transition risk may, like many other forms of risk, contribute to systemic risk,” Norges Bank said.