Oil increased as US crude inventories dropped, exacerbating concerns about a tight market after traders expressed doubt that OPEC+ can deliver on its agreement to accelerate the pace of a supply hike.

West Texas Intermediate rose above US$116 a barrel, recovering losses of more than three per cent than earlier in the session. US crude stockpiles fell more than five million barrels last week, while New York-area gasoline stockpiles fell to the lowest since 2017, according to an Energy Information Administration report Thursday.

Earlier, OPEC+ agreed to boost supply increases by about 50 per cent to add 648,000 barrels. The decision comes after the European Union approved a partial ban on Russian oil imports. The decision suggests that Riyadh has finally assented to Washington’s request for more barrels. However, with the hike spread across the group’s member nations the actual production delivered to market is likely to be much smaller than advertised.

Even though the output hike is larger, “there is a healthy skepticism” in the market as to whether increasing production is possible, which is why oil rose after the announcement, said Tom Petrie, chairman at Petrie Partners in a Bloomberg TV interview. 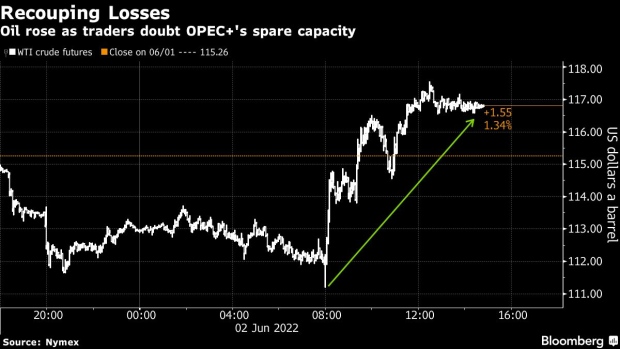 The cartel’s output increase will be divided proportionally between members in the usual way. This means that countries that have been unable to raise production, such as Angola, Nigeria and most recently Russia, would still be allocated a higher quota. This could lead to the actual supply boost being smaller than the official figure, as has often been the case in recent months.

Prices earlier fell amid signs of thawing in the strained relationship between Saudi Arabia and the US. Biden will likely meet de-facto Saudi ruler Crown Prince Mohammed Bin Salman if he travels to the country. That may pave the way for a production boost from the kingdom and help lower US fuel prices, which have soared to record highs, putting pressure on Biden ahead of November’s mid-term elections.

Oil capped a sixth monthly advance in May, the best winning streak since early 2011, as tightening markets because of the war in Ukraine coincided with a recovery in demand as countries threw off virus restrictions. European Union efforts to approve a partial ban on Russian oil imports hit an obstacle after Hungary raised new or already rejected demands.