Oil posted its sixth straight weekly gain, the longest winning streak since December, as the standoff between OPEC+ ministers over output dragged on at the alliance’s full meeting on Friday.

Futures in New York rose 1.7 per cent this week. Most members of the alliance backed a proposal to increase supply and extend the deal into later next year, but United Arab Emirates remains opposed, according to delegates. The ongoing dispute leaves open the possibility of a supply deficit in the global oil market over the second half of the year.

“Demand is continuously outstripping supply, even if you do get the gradual increase, demand will come on a lot faster, a lot stronger than they can raise output,” said Phil Streible, chief market strategist at Blue Line Futures LLC in Chicago. 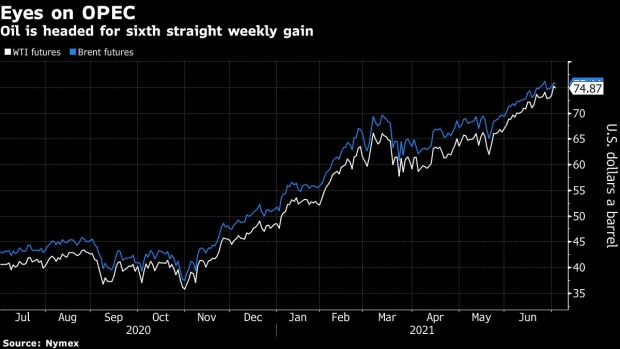 Oil jumped more than 10 per cent last month with the summer driving season boosting demand for U.S. crude and gasoline. The Organization of Petroleum Exporting Countries and its alliance have thus far taken a gradual approach to returning shuttered supplies, and calls for more output have increased in frequency. The world’s third-biggest oil consumer, India, has raised concerns about price pressures, with the nation expecting fuel consumption to return to pre-pandemic levels by the end of this year.

“The price at the pump for U.S. consumers as we enter summer travel season, we’re in the middle of it now, is a real inhibitor,” said Gary Cunningham, director of market research at Tradition Energy.

The OPEC+ disagreement centers on how the group measures its production cuts, with the UAE refusing to back a deal to raise output unless the baseline for its own curbs is increased, according to a delegate.

The dramatic turn of events at OPEC+ leaves the market in limbo and tarnishes the cartel’s carefully reconstructed reputation after last year’s brutal Saudi-Russian price war.

The UAE’s production cuts are measured from a starting point in 2018, which set its maximum capacity at 3.168 million barrels a day. But expansion projects have since raised that number to close to 4 million barrels. Reflecting that new capacity in its baseline could allow it to pump hundreds of thousands of barrels a day of extra crude.