Oil jumped to a four-month high after U.S. President Donald Trump indicated that he doesn’t want to add more sanctions against Chinese officials for now in a move to diffuse tensions with Beijing.

Crude futures in New York rose 2.3 per cent Wednesday. The decision to refrain from further restrictions added positive momentum to a market already supported by a U.S. government report showing that crude stockpiles contracted by the most this year.

Earlier, Saudi Arabia and Russia said OPEC+ will taper its output curbs in August, but the supply increase will be offset as demand recovers and laggard members compensate for overshooting quotas by making extra reductions.

“Oil has been tracking equities short-term, and equities went up on the news,” said Michael Hiley, head of over-the-counter energy trading at New York-based LPS Futures. “No conflict with China is good for oil.”

The large draw from American stockpiles in the Energy Information Administration report was largely due to declining imports, signaling the end of excess shipments from Saudi Arabia. At the same time, U.S. gasoline demand increased for the 11th consecutive week to the highest since late March. 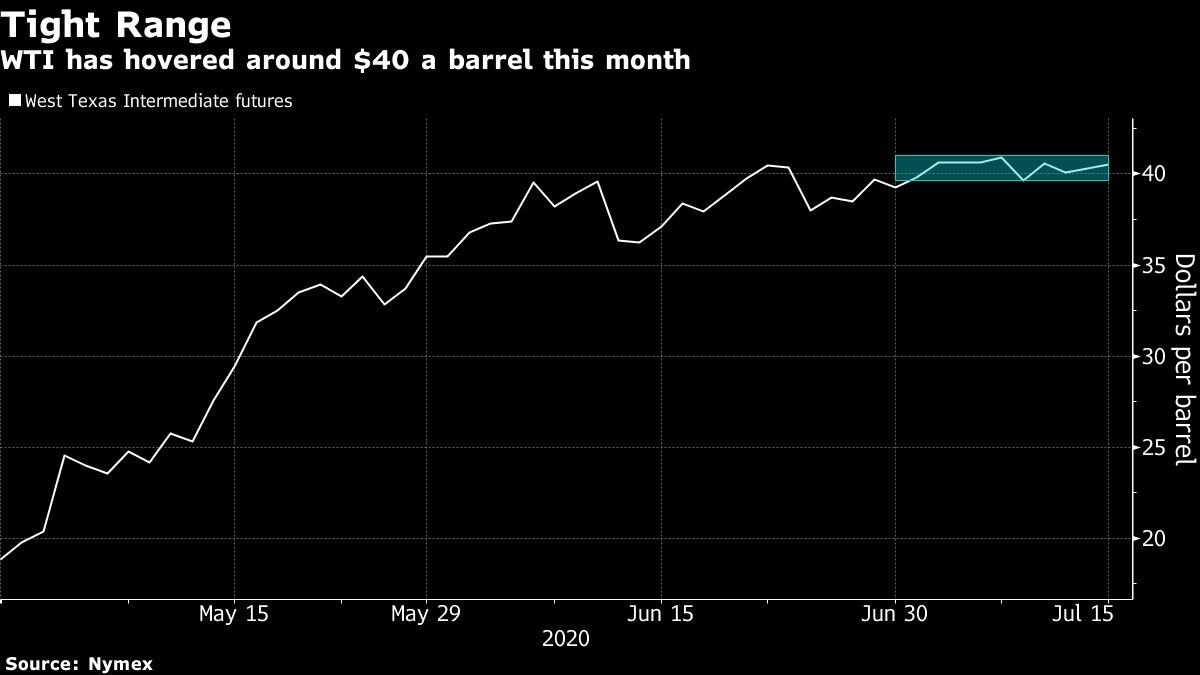 “Lower imports was a big reason for the draw, and the import number is a good number for what we’re going to see for the next few months,” said Brian Kessens, a portfolio manager at Tortoise. “Those 2 million barrels per day that OPEC might add on the first day of August won’t hit until September or October.”

Crude has traded in a tight range around $40 a barrel in July as lower supply and recovering demand is tempered with nervousness over a pandemic that’s still raging in many parts of the world. There are patchy indications of a market recovery, with sulfurous crudes in short supply and key swaps in the North Sea market -- known as contracts-for-difference -- signaling additional strength.

In physical markets, Bakken crudes strengthened Wednesday morning following reports that the U.S. Court of Appeals for the District of Columbia Circuit issued an administrative stay on a lower court order that the Dakota Access Pipeline to shut down next month.

• West Texas Intermediate for August delivery advanced 91 cents US to settle at US$41.20 a barrel in New York.
• Brent for September settlement climbed 89 cents US to end the session at US$43.79 a barrel.

CFDs in the North Sea closed in their strongest backwardation since February on Tuesday, according to Bloomberg fair-value data, pointing to supply tightness in some corners of the market.

The 23-nation OPEC+ coalition, led by Riyadh and Moscow, will taper its curbs to 7.7 million barrels a day in August from 9.6 million currently, Saudi Energy Minister Prince Abdulaziz bin Salman and his Russian counterpart Alexander Novak said on Wednesday at the meeting of the group’s monitoring committee.

Yet coalition members that didn’t fulfill their commitments to cut output in May and June — such as Iraq and Nigeria — will make up for it with extra reductions in August and September, the prince said at the start of the conference.

--With assistance from Alex Longley and Elizabeth Low.