Oil held gains after recovering from a weak start as declines in the US dollar offset concerns that global demand is under pressure.

West Texas Intermediate settled at US$87.8 a barrel for the day after earlier sinking to US$85. Risk sentiment generally firmed across markets on Monday with equity markets climbing in Europe and the American currency weakening sharply as traders bet inflation is near a peak. A weaker greenback tends to benefit assets priced in the currency.

China’s efforts to suppress COVID-19 by curbing activity has weighed on oil prices with their potential of slowing down global demand. Nonetheless, some analysts see a host of bullish factors that could elevate prices heading into the end of the year.

“A lot has turned bullish for oil today -- the dollar rally halted on optimism that inflation will continue to cool; Iran nuclear deal talks stalled, which delays the idea that any relief to supplies will be happening anytime soon,” said Ed Moya, senior market analyst at Oanda.

“Food and medical shortages in China raise the prospects that President Xi will soon have to abandon their zero-COVID policy. The oil market still remains tight and the latest plunge was overdone,” Moya added. 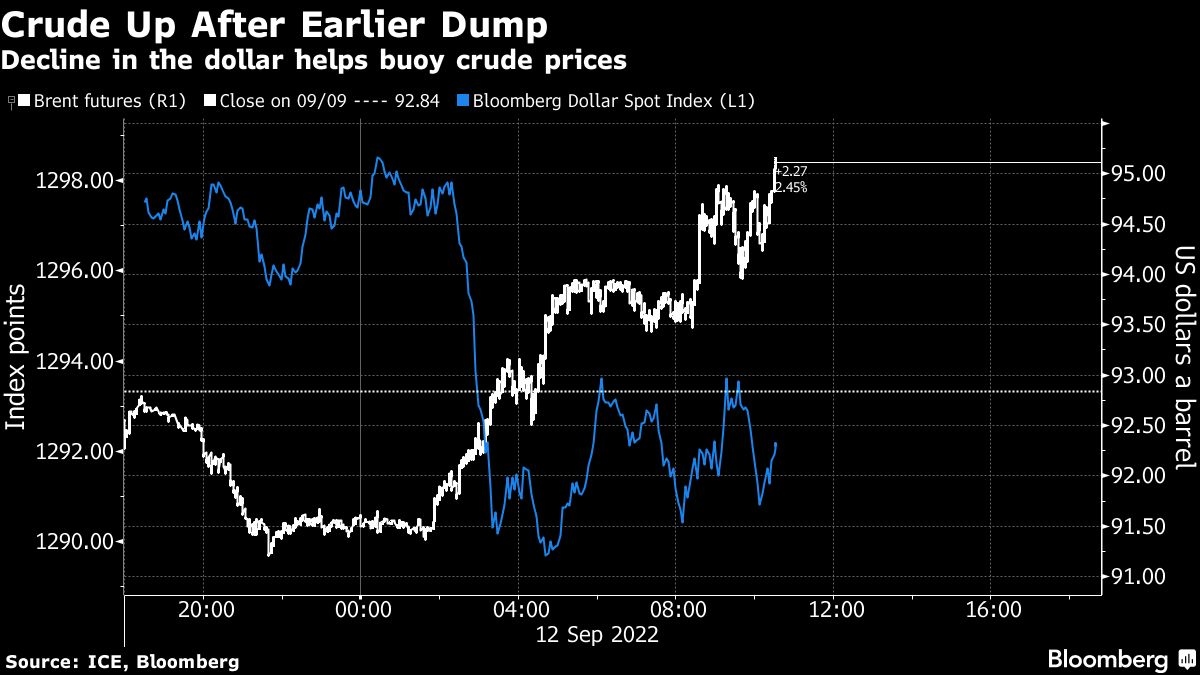 Crude has sunk by almost a third since June, shedding all the gains since Russia’s invasion of Ukraine. The reversal has come as central banks, including the Federal Reserve, tighten policy to quell inflation. Still, back-to-back declines in the dollar have helped oil recover from its lows in recent days, while a spate of Chinese crude purchases has spurred some optimism that the real-world market for barrels may have bottomed.

Chinese authorities have intensified lockdowns and restrictions lately as a key Communist Party meeting looms. Reflecting the challenges, UBS Group AG trimmed its December Brent crude forecast by US$15 a barrel. An outbreak at a top Beijing media school should be stamped out “in the shortest period of time,” local government officials said Sunday.

“Everyone’s worried about this slowdown in demand. But boy, we better hope for a slowdown in demand because we’re running out of oil in the SPR and if China reopens, we’re not going to have enough oil to meet that demand,” said Phil Flynn, senior market analyst at Price Futures Group.

The US has released barrels from its strategic reserve this year in an attempt to offset supply tightness but those volumes are set to end shortly, and barrels in underground caverns are at the lowest levels in almost three decades.

In the US late Friday, the Treasury issued rough compliance guidelines for the proposed cap on Russian oil, focusing on the documentation needed by the private sector to adhere to the program, which is meant to kick in from December as Europe tightens sanctions on flows. Deputy Treasury Secretary Wally Adeyemo said Moscow would have no choice but to participate.

Iranian nuclear talks were also in focus as the UK, France and Germany said over the weekend that they have “serious doubts” about Tehran’s commitment to a new agreement. Should a pact be agreed to, it could pave the way for greatly increased flows of Iranian crude to the global market.