Oil declined for a second day as the spread of COVID-19’s delta variant in China threatens to disrupt the recovery in global crude consumption.

West Texas Intermediate futures ended Tuesday’s session down 1 per cent at the lowest closing price in almost two weeks. Nearly half of China’s 32 provinces have been gripped by the latest outbreak in Asia’s largest oil market, with 5 per cent of worldwde short-term oil demand potentially at risk, according to calculations by China National Petroleum Corp. The price drop was tempered somewhat by a rally in equities trading and the “potential hijack” of a ship in the Gulf of Oman.

“China demand concerns because of the renewed restrictions from the viral spread were what caused the earlier weakness,” said Phil Flynn, senior market analyst at Price Futures Group. 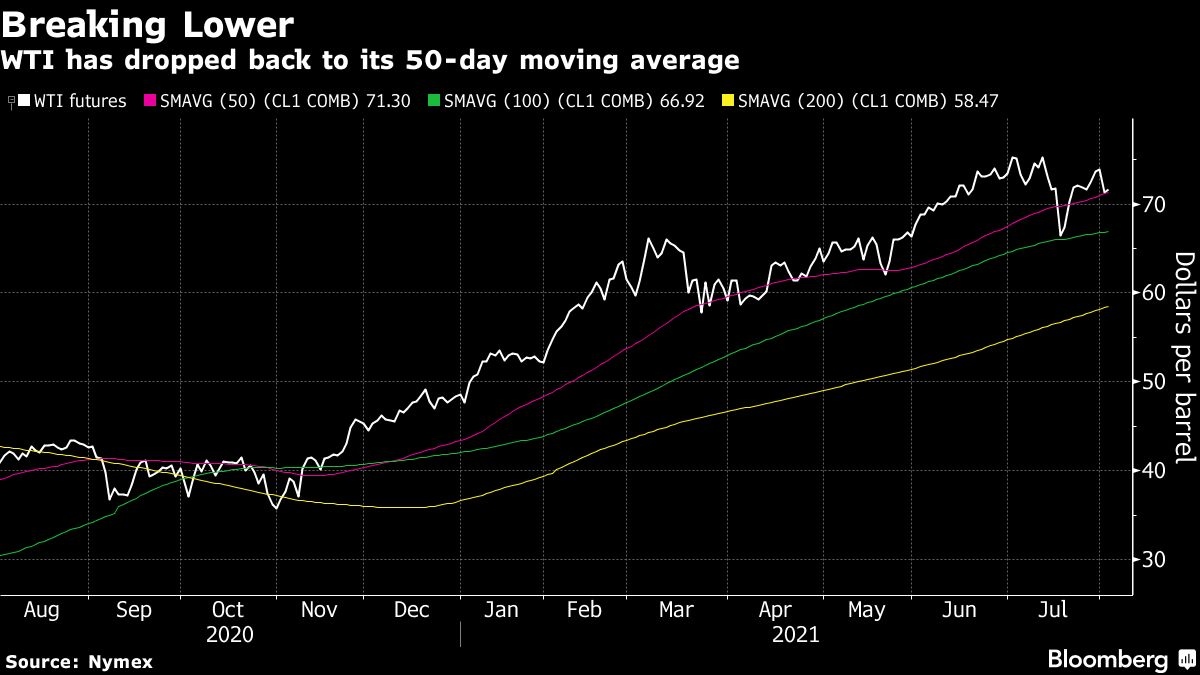 Crude rallied strongly in the first half of the year as the rollout of vaccines allowed major economies to reopen, boosting oil demand and draining the glut built up during initial waves of the pandemic. However, the fast-spreading delta variant has led to renewed restrictions in many countries.

“Asia-Pacific is currently the focal point of lockdowns,” said Pavel Molchanov, an analyst at Raymond James & Associates Inc. “There are 887 million people worldwide are currently in lockdown, which is more than at the beginning of 2021, and 85 per cent of them are in Asia-Pacific.”

Crude’s decline also put the U.S. benchmark under technical pressure. WTI fell below its 50-day moving average and is edging closer to its 100-day moving average. Such moves can often spark additional selling from trend-following funds.

The U.S. benchmark’s nearest timespread weakened on Tuesday. While the spread is still in a bullish backwardation structure -- with near-dated prices above those further out-- it narrowed to the smallest in about a week.

Meanwhile, U.S. crude stockpiles fell by 3 million barrels last week, according to the median estimate of analysts surveyed by Bloomberg. The industry-funded American Petroleum Institute will release its inventory tally later Tuesday, while the U.S. government will report stockpile data on Wednesday.