Oil climbed as optimism over progress in reopening some of the world’s largest economies outweighed deepening coronavirus risks elsewhere.

Futures rose 1.4 per cent in New York after flipping between gains and losses earlier Monday. A European Union plan to ease restrictions for vaccinated travelers over the summer travel season is boosting sentiment. In the U.S., most capacity restrictions will be lifted in states around the New York region starting later this month. The U.S. dollar also weakened, making commodities priced in the currency more attractive.

“We’ve likely put the worst of Europe behind us,” and “as they turn toward reopening, that will help,” said Rob Haworth, senior investment strategist at U.S. Bank Wealth Management. While the recovery in other regions catches up, oil price upside in the near term “hinges on the U.S. reopening story and the return of U.S. demand.” 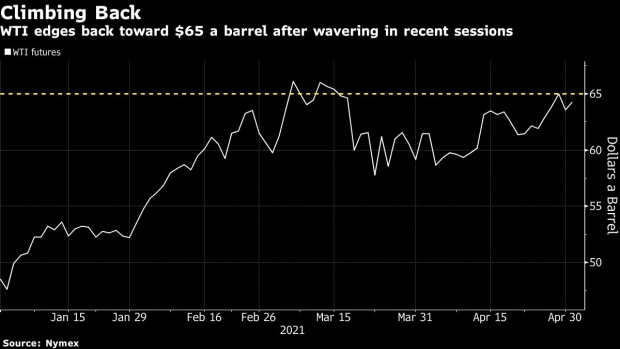 U.S. benchmark crude futures have rallied more than 30 per cent this year, but the market continues to face an uneven global demand recovery as some countries suffer from new waves of coronavirus cases. Sales of gasoline in India were the lowest in April since August, while average daily diesel sales were the lowest since October, preliminary data from officials with direct knowledge of the matter show.

Iraq’s oil minister, Ihsan Abdul Jabbar, said crude would probably remain around US$65 in the coming months. OPEC, of which Iraq is the second-biggest producer, will continue trying to keep prices “within normal averages,” he told reporters in Baghdad on Monday. “There is no concern about a drop in prices.”

In options markets, there are signs that traders may be looking to cover in the case global benchmark Brent futures surge in the back half of the year. Bullish call options that would benefit a buyer if Brent futures for December settlement top US$100 a barrel have traded over 10,000 times over the past two days.

Commodities have been caught up in the ongoing reflation trade, as signs of solid economic growth in countries such as the U.S. compound expectations for accelerating inflation. Over the weekend, Warren Buffett said the U.S. economy is “red hot” and that there is more inflation “than people would have anticipated six months ago.”

“Buffett sees strong inflationary pressures at the moment and that oil and gas are going to be needed for many years and even decades, despite the push for zero-carbon economies,” which supports “the big revival in commodity index investing.” said Ryan Fitzmaurice, commodities strategist at Rabobank.

Traders are also tracking talks between the Iran and world powers including the U.S. over the revival of a nuclear accord. A deal would potentially lead to Washington easing sanctions on Iranian crude exports, though U.S. officials said a deal isn’t close yet. The Islamic Republic has presidential elections next month, which may complicate the talks.

--With assistance from Verity Ratcliffe.