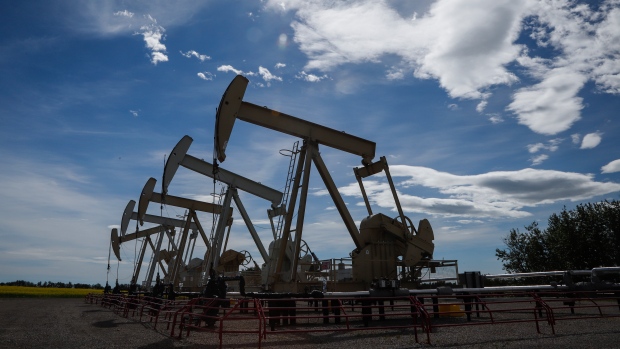 Pumpjacks draw oil out of the ground near Olds, Alta., Thursday, July 16, 2020. , THE CANADIAN PRESS/Jeff McIntosh

Oil closed at the highest in over a week after OPEC boosted its expectation for this year’s demand recovery, while signs continue to emerge of rising fuel consumption in parts of the world.

Futures rose 0.8 per cent in New York on Tuesday, settling above US$60 a barrel for the first time since early April. OPEC raised its forecast for oil consumption by 190,000 barrels a day for 2021, though lowered its outlook for the second quarter.

Traders are also watching for signs of a robust demand rebound in the U.S., the world’s top oil-consuming country. In New York City, toll bridges and tunnels are on pace for the busiest April in at least seven years. At the same time, inflation data showed the biggest increase since 2012 as signs of an economic rebound grow.

“There’s going to be tremendous pent-up demand for crude,” said Edward Moya, senior market analyst at Oanda Corp. “There are some areas that are seeing cases trend higher, but the restrictions are going to be short-lived as vaccines get distributed.”

Prices were little changed after the American Petroleum Institute was said to report that U.S. crude stockpiles fell by 3.61 million barrels last week, which would be the third straight weekly drawdown if confirmed by U.S. government figures on Wednesday. The API report also showed gasoline inventories rising by 5.57 million barrels, while distillate inventories fell. 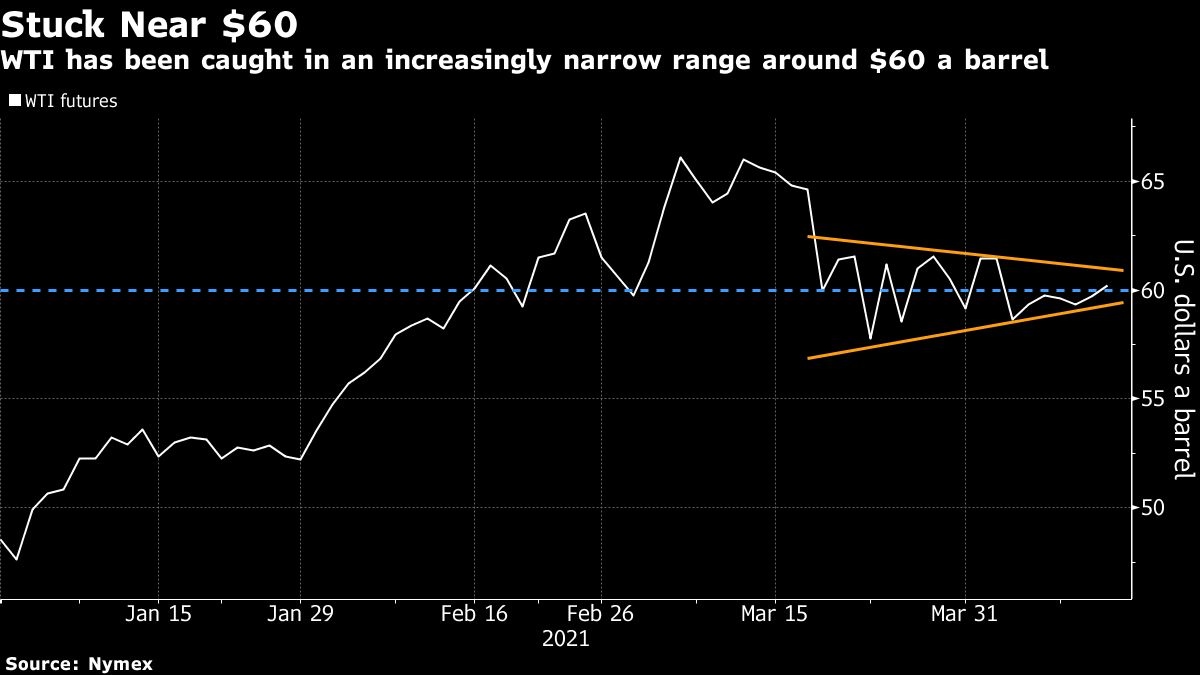 Despite early signs that travel demand is starting to materialize, prices have yet to break out of the narrow trading range they’ve been stuck in since mid-March. A measure of market volatility slumped to the lowest since February for West Texas Intermediate futures, while aggregate trading volume in the benchmark remained below its 15-day moving average for a seventh straight session.

The market is still contending with spreading near-term demand concerns because of the resurgence of the virus. A flare-up of COVID-19 cases is leading to renewed restrictions in countries like India, where streets are emptying again as the nation tackles a new wave of infections. Meanwhile, U.S. health officials called for an immediate pause in use of Johnson & Johnson’s single-dose COVID-19 vaccine on worries over a rare and severe form of blood clotting.

“For things to open back up just like they normally were, it’s going to take some time,” said Tariq Zahir, managing member of the global macro program at Tyche Capital Advisors LLC. “The biggest issue going forward is getting as many people vaccinated as possible.”

The Organization of Petroleum Exporting Countries and it allies will be returning about 2 million barrels a day of output from May to July. More than half of the increase will be provided by OPEC’s de facto leader, Saudi Arabia, which has been making extra cutbacks to help clear the lingering glut. Rising demand means stockpiles should continue to diminish, the group indicated in a monthly report on Tuesday.

But rising output elsewhere could complicate the balance. Crude production next month in the Permian Basin, the most prolific U.S. shale patch, is expected to reach levels not seen since the start of the pandemic.