Oil jumped the most since mid-April amid broader market gains and after a U.S. government report showed declining fuel and distillate stockpiles during the high-demand summer driving season.

Futures rose 4.6 per cent in New York on Wednesday with U.S. equities advancing as better-than-expected corporate earnings took the focus off concerns about the economic impact of coronavirus flareups. Domestic distillate supplies fell by the most since mid-May and gasoline stockpiles also dropped last week, according to an Energy Information Administration report. Crude is clawing back from losses made Monday, when prices dropped more than 7 per cent on COVID concerns.

“The market’s really being driven by macro factors,” said Matt Sallee, a portfolio manager at Tortoise, a firm that manages roughly US$8 billion in energy-related assets. “The market wants to move higher after selling off pretty hard on Monday.” 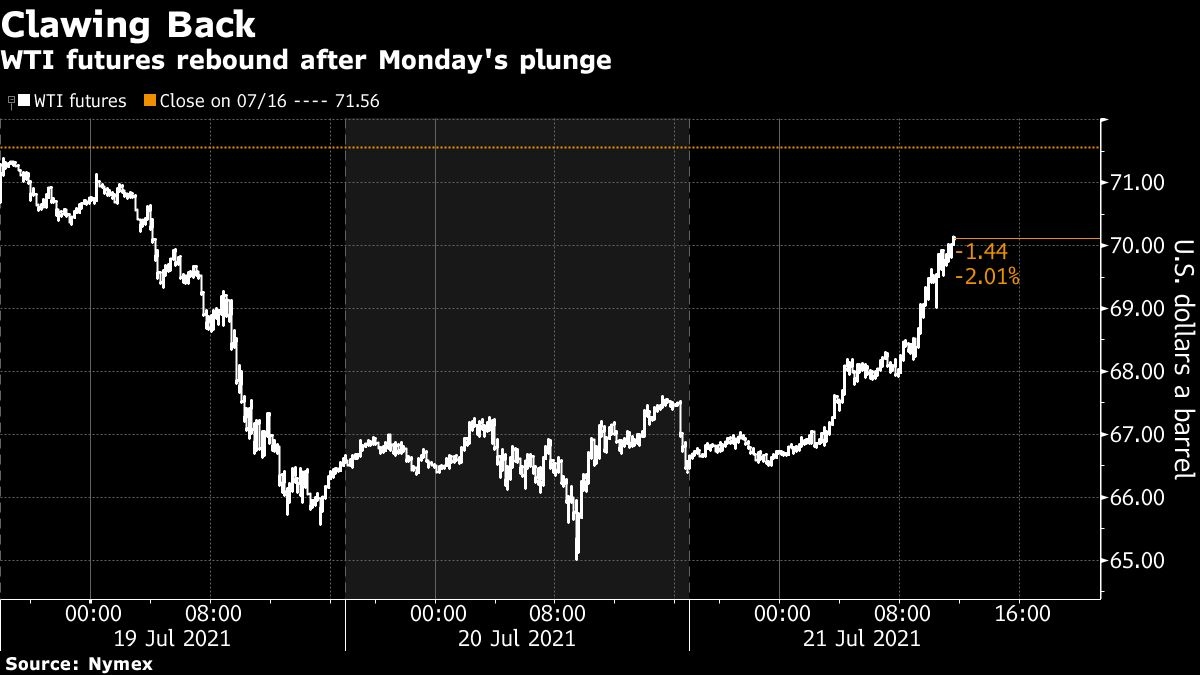 Despite lingering worriers around the spread of the delta variant and its impact on demand, oil market fundamentals suggest tighter supplies and low inventories through the end of the year. Plus, shale drilling in North America is going to slow down in the second half, according to Baker Hughes Inc., even with crude prices at levels that would normally lure back explorers.

Inventories at the nation’s largest storage hub in Cushing, Oklahoma, fell to the lowest since January 2020, according to the EIA report. While overall crude supplies edged higher, a majority of the increase occurred on the West Coast, an area often ignored by traders because its distribution system is isolated from the rest of the country.

Oil-product demand in the U.S. is “strong” and “steady,” pointing to a lot of mobility in the country, said Sallee. “The U.S. economy is red-hot, and that’s flowing through to demand,” he said.

Still, a full recovery of oil demand isn’t likely until 2023, with some countries unlikely to reach a 60 per cent vaccination rate, according to Sarah Emerson, an analyst at ESAI Energy.