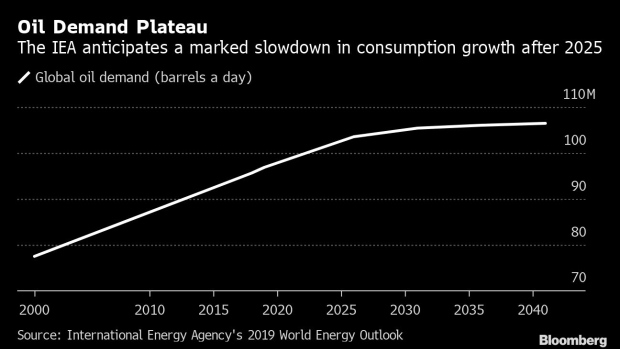 Snow covers sections of connected pipework in the yard as night falls at the Gazprom PJSC Atamanskaya compressor station, part of the Power Of Siberia gas pipeline, near Svobodny, in the Amur region, Russia, on Wednesday, Dec. 11, 2019. The pipeline, which runs from Russia’s enormous reserves in eastern Siberia and will eventually be 3,000 kilometers (1,900 miles) long, will help satisfy China’s vast and expanding energy needs. Photographer: Andrey Rudakov/Bloomberg , Bloomberg

(Bloomberg) -- Global oil markets notched up a number of milestones this year that echoed the story of the past decade: the world has shifted from an era of supply tightness to plenty.

What distinguished the developments of 2019 was not just how big they were but often how little impact they had. From the world’s biggest-ever initial public offering to its worst-ever supply disruption, a barrage of sanctions on exporters to two OPEC interventions, never before had so many momentous events left investors so unmoved.

At the heart of that indifference was the force that has transformed world energy balances over the past 10 years: the American revolution in shale oil and gas, which is cushioning global markets against shocks that would once have sent prices rocketing. This too achieved a landmark in 2019, turning the U.S. into an net exporter of crude and refined oil.

And there was another turning point showing the years ahead may also be marked by supply abundance. For the first time, the world’s leading energy institution predicted that demand for oil -- once expected to keep growing almost indefinitely -- will stall at the turn of the next decade.

“This year is probably the first in my recollection where oil prices so extremely decoupled from geopolitical risk,” said Amy Myers Jaffe, senior energy and environment fellow at the Council on Foreign Relations in New York. “It was also the year when analysts and car companies started to talk about the possibility of peak car and peak demand with increasing probability.”

The biggest headlines of 2019 came out of the world’s largest oil exporter, Saudi Arabia. Riyadh finally floated part of state oil giant Saudi Aramco after a laborious three-year process, securing a valuation of $2 trillion that made it the world’s biggest company.

Yet the 1.5% stake sold was just a portion of the original plan, and mostly marketed to local buyers instead of the foreign investors once courted, as fund managers balked at the lofty asking price.

The sudden loss of 5.7 million barrels a day was exactly the crisis the industry had feared for decades, and in previous years might have triggered a prolonged rally. Although prices initially rocketed 19% in an unprecedented surge, the gains dissipated in two weeks.

Riyadh’s attempts to shore up oil prices also yielded lackluster results. The Saudis led the OPEC cartel and its partners in not one but two coordinated production cutbacks this year, an unusual level of activity for the organization, and reduced its own output far more than initially planned.

Their efforts were amplified by extreme levels of political involvement in the oil market, as U.S. sanctions squeezed exports from OPEC members Iran and Venezuela to the lowest in decades. Yet prices remain about 12% below this year’s high, trading near $66 a barrel in London.

The main source of the cartel’s struggle remained the U.S. shale-oil industry, which has turned the country into the world’s biggest oil producer, and propelled nationwide production to a new record of almost 13 million barrels a day this year.

Even as the shale boom shows some signs of slowing, production from offshore deposits once thought unviable in an era of low prices -- such as Brazil and Norway -- is springing to life.

“Despite major geopolitical tensions around the world, oil markets have remained surprisingly calm,” said Fatih Birol, executive director of the International Energy Agency in Paris. “This is mainly due to significant amounts of oil supply coming into the market from the U.S. as a result of the shale revolution, and from other non-OPEC producers.”

The transformation though isn’t confined to the supply side of the market.

The IEA, which for years projected that oil demand would increase for the foreseeable future, predicted last month that consumption will plateau at the turn of the next decade as efforts to avert catastrophic climate change spur the use of more efficient car engines and electric cars.

Growth in world oil demand will dwindle from about 1 million barrels a day, or 1%, currently to roughly 100,000 a day in the 2030s, the IEA said. Sales of passenger vehicles with internal combustion engines are probably already in decline, according to Bloomberg New Energy Finance.

The change is increasingly occupying financial investors, who are shifting their portfolios from fossil fuels to more sustainable energy sources. Reflecting that anxiety, the organizers of the “Oil & Money” conference, held annually in London for the past four decades, announced a re-branding that will remove both words from the title.

Perhaps the greatest symbol of changing attitudes has been the rise of 16-year-old Swedish environmental activist Greta Thunberg. The “strike for climate” she began at school last year became a global phenomenon, leading her to address the United Nations in New York and earn Time magazine’s ‘Person of the Year’ award -- a level of international popularity the organizers of the Aramco IPO can only dream of.

To contact the reporter on this story: Grant Smith in London at gsmith52@bloomberg.net