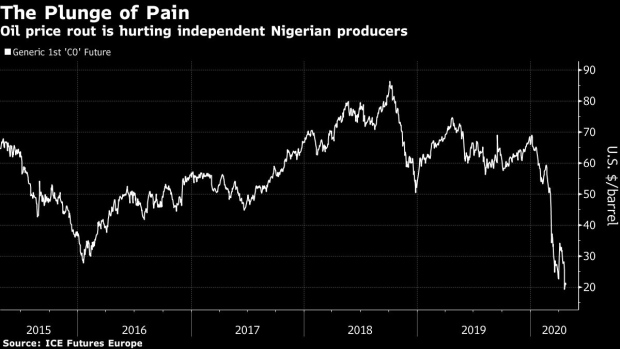 The unprecedented oil price crash is destroying Nigeria’s independent crude producers, firms who between them pump about a fifth of the nation’s supply, and risks inflicting severe pain on the local banks that finance them.

“The impact is a complete and utter disaster,” Kola Karim, chief executive officer of Shoreline Group, the third-biggest independent, said in an interview. “We’re under water, without adding the cost of finance. If you add the cost of financing, we’re drowning.”

While Brent crude futures plunged to a 21-year low of $15.98 earlier this week, the brutal reality for the West African country is that its barrels have been fetching even less because a glutted world oil market means physical cargoes -- including Nigeria’s -- are being sold at deep discounts. The coronavirus has brought transport systems to a standstill in many parts of the world, killing demand for fuels like gasoline and jet fuel.

The rout has been bad for all the country’s producers but the pain has been particularly acute for the independents who mostly acquired assets about six years ago. Unlike oil majors operating in the country, whose average cost of producing is about $22 a barrel, these companies need between $35 to $40 a barrel if they are to stay in business.

Nigeria’s independents pump roughly 400,000 barrels a day out of the nation’s average daily output of about 2 million. However, they account for almost 90% of the 3 trillion naira, or $8 billion, of all debts owed by companies producing oil in Nigeria, mostly of it to local banks. While a portion of the loans are hedged at as much as $50 a barrels, the bulk aren’t, raising the risk of a default that’s been exacerbated by the threat of production halts because of the dire state of the market.

The demise is a grim reversal for the Nigerian firms. Two years ago, the independents were aiming to add about 250,000 barrels a day of crude output by this year, led by the likes of Shoreline, Aiteo Group and Seplat Petroleum Development Co.. An official at Aiteo declined to comment while Seplat officials couldn’t be reached for comment.

Eroton Exploration & Production Co. the fifth-biggest independent, said that, while it’s still able to service its debts, the firm has suspended a planned $1.5 billion, 50-well campaign to more than double output to 100,000 barrels a day by next year.

“As with all operators it has affected our revenue projections considerably, however we are working aggressively on cost optimization initiatives to mitigate the challenge of reduced cost of oil,” Eroton CEO Ebiaho Emafo said. “Major capex spend would be put on hold in the short-to-medium term till the market stabilizes and we are able to drill and produce crude oil at profitable levels for the business.”

The price collapse is reverberating across the global oil industry. More than one third of U.S. rigs fleet has been shut down as rising global oversupply spurred drastic cost-cutting and cancellation of new projects. Independent firms in Russia are also struggling to cope.

Shoreline’s challenges pale in comparison to the many smaller, more heavily indebted Nigerian drillers, according to Karim. Even so, with an average daily output of 60,000 barrels, and just under $300 million in outstanding payments, having paid down a lot of its loans, “we’re still going to struggle,” he said.

The oil price crash has also had an impact on the Nigerian banking industry, where at least a third of all loans were made to the nation’s oil drillers, according to central bank data. Many say their customers are hedged, even if the full extent of that protection is unclear.

“We expect banks to proactively restructure vulnerable oil and gas facilities and we believe they will also take advantage of the regulatory forbearance given by the central bank to cushion the impact of weaker assets,” she said. If prices stay below $30 for as long as six months, then “we cannot rule out the possibility that some banks may not survive that.”