Oil capped its fifth week of gains on continued signs of robust demand and strained crude supplies that have taken prices to seven-year highs.

Futures in New York edged lower on Friday, just above $85 a barrel, but were still up 1.6% for the week. Oil neared $88 earlier this week for its highest level since 2014 as geopolitical tensions threatened greater supply outages alongside strong demand numbers, despite the omicron variant.

As prices rise, much of Wall Street has been growing steadily more bullish. Morgan Stanley has joined Goldman Sachs Group Inc. in forecasting $100 oil later this year, and Bank of America reiterated that it expects oil to hit $120 a barrel by the summer. Citigroup Inc. cautioned that sticking to a bullish view could be dangerous after this quarter. 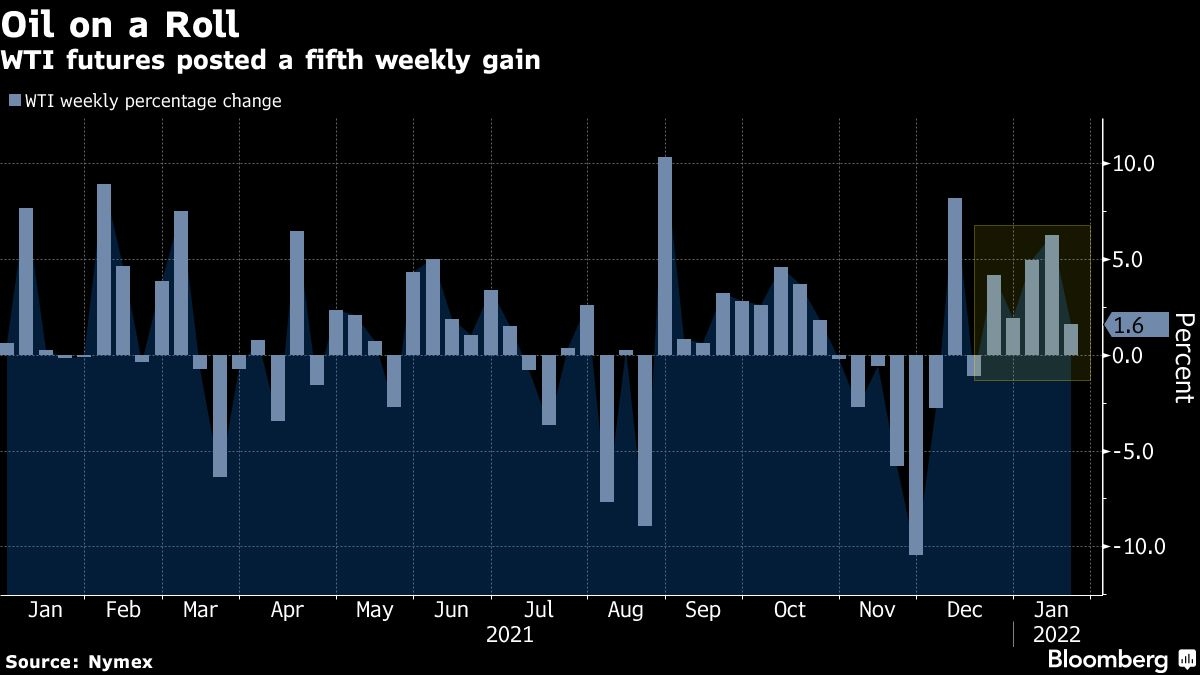 Markets also dissected the strong picture of demand that multiple reports provided this week. The International Energy Agency said the oil market was looking tighter than previously thought, with demand proving resilient despite the rapid spread of omicron. Additionally, U.S. demand is still running hot, with the total volume of oil products supplied to the market at the highest for this time of year in at least 30 years, according to the U.S. Energy Information Administration.

Earlier on Friday, futures fell over 3% alongside broader equity markets and raw materials including copper.

While commodities have been extremely resilient at the start of the year due to supply risks and geopolitical concerns, they won’t “continue to be completely insulated,” said Rebecca Babin, senior energy trader at CIBC Private Wealth Management.

Crude’s bumper rally had pushed many of the main futures contracts into overbought territory on a technical basis. Brent, WTI and heating-oil futures all moved out of that zone amid the sharp price pullback early Friday.

Oil’s rally has also caught the eye of the White House as it poses a political risk for President Joe Biden. The U.S. is considering accelerating the release of strategic reserves, but many of Biden’s options to address the rally would be limited and likely short-lived.

Still, the focus remains on how much further the Organization of Petroleum Exporting Countries and its allies can lift output. Pavel Zavalny, head of the Russian Duma Energy Committee, said restoring production won’t be easy amid technical challenges and underinvestment.