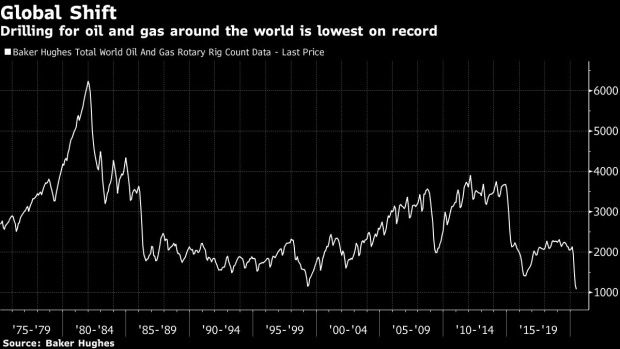 (Bloomberg) -- The world’s three biggest oilfield service companies wrote down the value of their assets to the tune of about $45 billion during the past year as customers engaged in severe spending cutbacks, according to Morgan Stanley.

The combined write offs, half of which stem from what were supposed to be blockbuster M&A deals, almost equal their combined market capitalization, analysts including Connor Lynagh wrote in a note to clients on Wednesday.

“The industry now appears to be in a significant capacity reduction and repair phase that we think will not quickly reverse,” the analysts wrote. “From a supply-side perspective, we think this effectively marks the bottom of the cycle.”

The hired hands of the oil patch who map underground pockets of oil and drill wells have taken much of the brunt of the worst-ever crude crash. Schlumberger Ltd., Halliburton Co. and Baker Hughes Co. are shrinking head count while emphasizing a greater push toward digitalization in hopes of boosting profits as customers eschew big-dollar drilling projects.