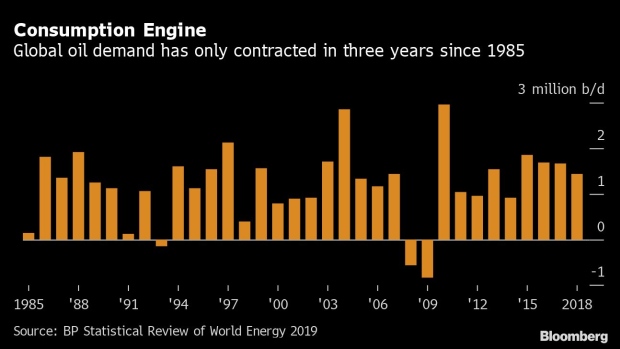 Oil pumping jacks, also known as "nodding donkeys", operate in an oilfield near Almetyevsk, Tatarstan, Russia, on Wednesday, March 11, 2020. Saudi Aramco plans to boost its oil-output capacity for the first time in a decade as the world’s biggest exporter raises the stakes in a price and supply war with Russia and U.S. shale producers. Photographer: Andrey Rudakov/Bloomberg , Bloomberg

(Bloomberg) -- The survivors of oil’s last crash were the lowest-cost producers. But the crisis engulfing the industry now is so fast, the same rules don’t apply.

From the shale patch of Texas and the oil sands of Canada to the plains of Siberia, production of at least one in every 10 barrels around the world is likely to be shuttered as demand is shredded by the coronavirus pandemic. Cost won’t be the ultimate arbiter for producers this time, because as the International Energy Agency says, “there could soon be no place for their oil to go.”

Every imaginable space -- from tanks and pipelines to rail cars -- is filling to the brim. It’s a key reason that pressure is building for an output cut by OPEC and other producers at their meeting next week, though even the 10 million barrels a day of curbs that’s been touted may not be enough. Only those who can find a place to shelter their unwanted crude are likely to remain standing.

“It’s important to think about who’s going to shut in. It’s all dictated by logistics and where you sit in these major pipelines around the world,” Jeff Currie, head of commodities research at Goldman Sachs Group Inc., said in a Bloomberg television interview. “It’s going to be Russia, the U.S., Canada and parts of Latin America where you see the real damage.”

The rout in demand is staggering. With large swathes of the global economy shut down to tackle the virus pandemic, with no idea of how long it’ll continue, some oil traders are estimating an unprecedented 35 million barrels a day destruction in oil use.

Even if OPEC and other producers agree to a 10 million barrels a day of output cuts -- in itself a mammoth undertaking -- the IEA estimates 15 million a day of stockpile would still build up.

When oil last collapsed five years ago it was America’s shale producers who took the immediate hit because of their sensitivity to price swings, and the nation’s industry is set to be battered again. Pipeline operators have asked drillers in Texas to ratchet back output.

This time round everyone is sharing the pain. About 7 million barrels of daily output due to be shipped next month by a range of exporters is “homeless,” with “literally nowhere to go,” consultant JBC Energy GmbH estimates.

Production is starting to buckle everywhere.

IHS Markit expects as much as 10 million barrels a day of output to be shut-in from April through June as storage fills up. In Canada, Athabasca Oil Corp. suspended some oil sands operations and Suncor Energy Inc. said last month it will partly shut some of its fields.

Brazil’s Petrobras is paring production by 200,000 barrels a day. Landlocked Chad in Africa has halted two fields, and Ecuador, Citigroup Inc. said, “isn’t able to sell its crude anywhere to anybody.”

Producers who are operating offshore, or have access to coastal terminals, possess the widest options to reroute their barrels and will be the most “immune,” Goldman’s Currie said. Those “sitting behind thousands of miles of pipe” are the most exposed.

Russia, despite having helped initiate the global price war, is among those particularly vulnerable to its fallout. As sales from ports and its Druzhba pipeline melt away, the country could be incapable of selling about 1 million barrels a day of its output, according to Ed Morse, head of commodities research at Citi.

Neighbors such as Kazakhstan and Azerbaijan, both far away from their customers, face “severe offtake issues,” said David Wech, an analyst at JBC Energy in Vienna.

While logistics are critical, oil’s collapse is simply making some production unprofitable. At $25 a barrel crude, about 5% of global production is losing money, according to the IEA.

Companies are also slashing spending. BP Plc will invest less in its U.S. shale operations this year as it looks to reduce expenditure by about $5 billion, lowering production. Some North Sea fields just aren’t economical at current oil prices.

Amid the carnage, there may still be a winner. Saudi Arabia, OPEC kingpin and the main architect of the bruising price war, can pump crude from its vast fields at less than $10 a barrel. It also has access to plentiful storage around the world -- from Egypt to Japan.

Riyadh is flooding the market with crude as it threatens to pump at record high levels, contributing to oil’s rout and forcing producers to consider an output agreement.

The kingdom is convening an emergency online gathering of the OPEC+ coalition on Monday. The meeting is open to producers worldwide, including the U.S. If America were to join coordinated production cuts, that would be an unprecedented move away from the country’s free-market ethics.

But there are no guarantees that a deal can be reached. And even if an expanded alliance is made and the currently discussed 10 million barrels a day of cuts are agreed, it would ultimately be insufficient in the face of such an enormous glut.

“The market is going to be shutting stuff down whether you like it or not,” said Jan Stuart, global energy economist at Cornerstone Macro LLC. “That horse has left the barn.”